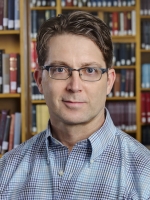 Rex Hatfield joined Princeton University Library in 1991 as a cataloger on the Slavic/Germanic Cataloging Team. He has been a cataloging team leader since 2002 and has been the German Studies Librarian since 2008. Rex has a Bachelor of Arts in German from Iowa State University and a master's degree in German and Library Science from the University of Iowa. His scholarly interests include German literature and film. He is a sixth Dan black belt in Taekwondo and coaches the University Taekwondo team.