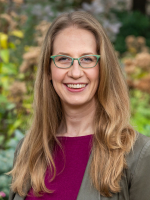 Sara Hagenbuch joined the Mendel Music Library staff in 2017. Before coming to Princeton, Sara was the circulation/reserves supervisor at the Earth Sciences and Map Library in University of California, Berkeley and a library circulation supervisor at the San Francisco Conservatory of Music. She also maintains an active career as a professional singer. Her scholarly interests include early music and historical performance practice, particularly the music of G.F. Handel. Sara holds a Bachelor of Music from Ithaca College and a Master of Music in vocal performance from the San Francisco Conservatory of Music.