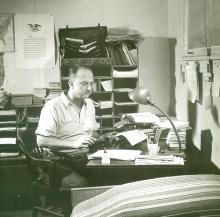 The papers contain a wide variety of material spanning roughly 30 years of Adamic's life. The manuscripts of 15 of his books, many of his short stories, articles, and lectures, as well as sketches, paste-ups, and proofs of Adamic's own journal T & T, are all included in the collection. Among the books are Cradle of Life (N.Y.: Harper, 1936), Dinner at the Whitehouse (N.Y.: Harper, 1946), Dynamite (N.Y.: Viking, 1931), The Eagle and the Roots (Garden City, N.Y.: Doubleday, 1952), From many Lands (N.Y.: Harper, 1940), Grandsons (N.Y.: Harper, 1935), The House in Antigua (N.Y.: Harper, 1937), Laughing in the Jungle (N.Y., Harper, 1932), My America (London: H. Hamilton, 1938), My Native Land (N.Y.: Harper, 1943), A Nation of Nations (N.Y.: Harper, 1945), The Native's Return (London: V. Gollancz, 1934), and Two-Way Passage (N.Y.: Harper, 1941). In addition to the manuscripts, which comprise nearly one third of these papers, a significant body of correspondence with many individuals, among them prominent American literary and political figures of the 1920s, 30s, and 40s, is also preserved here. These communications relate to Adamic's business, political, and social involvements, his on-going interest in American society, and, in his later years, his interest in post-war reconstruction, foreign policy, and world understanding.

Also included are Adamic's subject files, which are divided into two parts. The first of these files, arranged by nationality--such as British, Chinese, Czech, Danish, Dutch, Finnish, French, German, Greek, Hungarian, Japanese, Lithuanian, Polish, Scottish, Slovak, Swedish, Swiss, Ukranian, and Yugoslav--houses clippings, pamphlets, and correspondence related to Adamic's interest in the experiences of American immigrants and their problems. A general file contains material on topics such as refugees, labor, and prejudice. In addition, the collection has an assortment of contracts, copyrights, awards, press releases, advertising, and other ephemera related to Adamic's career and is enhanced by the inclusion of many personal photographs of his family friends, home and haunts, as well as photographs and maps of Yugoslavia before, during, and after World War II.

There are over 120 works of other writers included in these papers, ranging from a one-page book review by Mary Austin, to a typed speech by Marshall Tito, as well as several full-length books. Supplementing this is a rich assortment of printed matter, notably, complete sets of The Bulletin of the United Committee of South Slavic Americans, IN RE: Two-Way Passage, T & T, and 15 issues of Common Ground, plus tearsheets, pamphlets, periodicals, and clippings. Documentation of recent symposia on Adami''s life and work forms the final element of this archive.