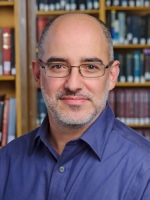 Fernando Acosta-Rodríguez has been the Librarian for Latin American, Iberian, and Latino Studies at Princeton University Library since 2003. He came to Princeton from The New York Public Library where he served as its Latin American Bibliographer starting in 1997. He earned both his Master of Library and Information Science and his Master of Science in Politics at the University of Texas in Austin.