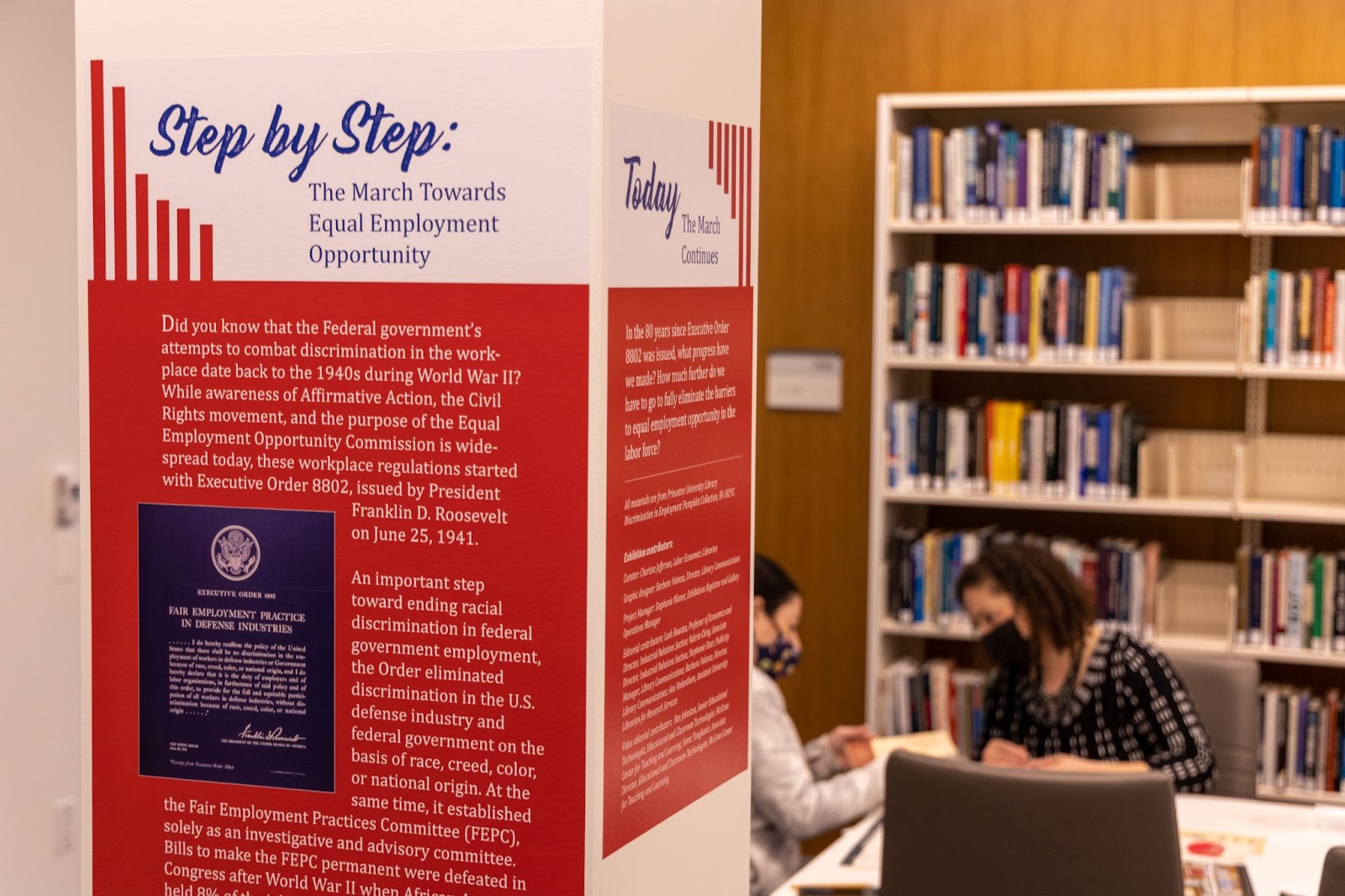 “Understanding the political origins of antidiscrimination in the workplace is an important lesson for all students of today's labor market,” said Leah Boustan, director of the Industrial Relations (IR) Section at Princeton University.

A new exhibit, opening February 3, 2022 in the Industrial Relations Section at Princeton University, hopes to help accomplish this. “Step by Step: The March Towards Equal Employment Opportunity” –jointly developed by Princeton University Library (PUL) and the IR Section–showcases antidiscrimination in the workplace efforts made by the U.S. federal government and state and local governments over the last 80 years, as well as those of labor unions, councils, and professional associations.

Starting with Executive Order 8802, signed by President Franklin D. Roosevelt on June 25, 1941, the U.S. federal government’s attempts to combat discrimination in the workplace date back to World War II. E.O. 8802 eliminated discrimination in the U.S. defense industry and federal government on the basis of race, creed, color, or national origin, when record numbers of African Americans were employed by the government and the defense industry. 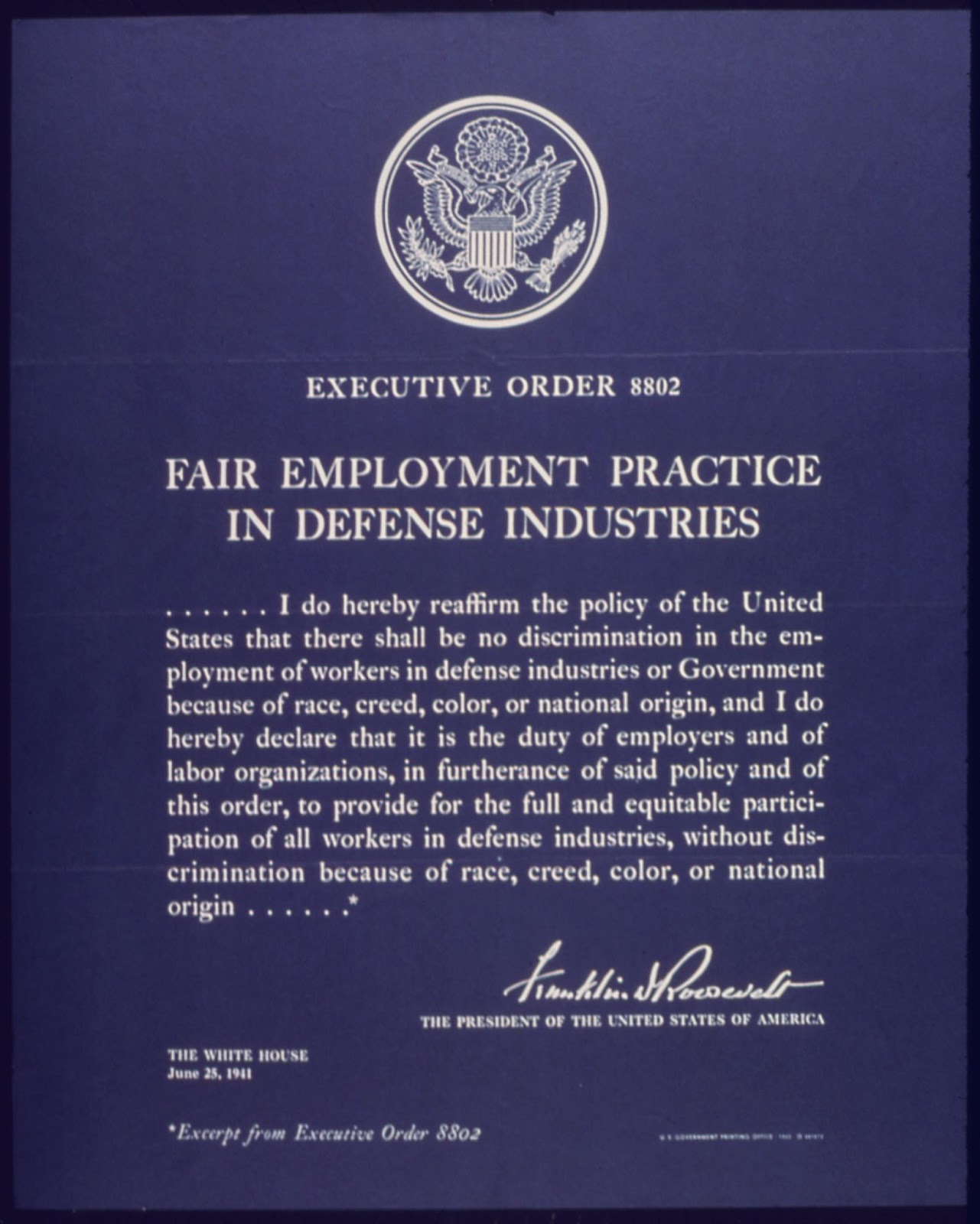 At the same time, it established the Fair Employment Practices Committee (FEPC), solely as an investigative and advisory committee. Bills to make the FEPC permanent were defeated after World War II by a Congress heavily influenced by Southern Democrats. It is estimated that at the end of WWII, African Americans held 8% of the jobs in the defense industry and about 200,000 government jobs. While the FEPC was not enacted into federal law, it contributed to the momentum behind future efforts on equal employment and antidiscrimination, and significantly impacted policies and legislation thereafter. Between 1945 and 1946, bills to enact state-level fair employment practices were introduced in 22 state legislatures.

The exhibit is curated by Charissa Jefferson, PUL’s Labor Economics librarian and liaison to the IR Section. “Upon starting my new position, one of the things I was most excited to explore was the University’s former Industry Relations Library collection,” Jefferson said. “I arranged to view the collection on the theme of ‘Discrimination of Employment,”’ to speak to current issues. I was hopeful that the pamphlet collection would be visually appealing for an exhibition. It did not disappoint.”

The collection of five boxes and folders included 37 pamphlets that addressed the theme of “Discrimination in Employment.” Nineteen were selected by Jefferson for display over the course of the run of the exhibit. Each selected pamphlet strives to communicate with the public, employers, and employees of their human and civil rights, as well as the business and economic impact of discrimination in employment.

The exhibit will also feature a video reel that demonstrates social acceptance of the principle of fair employment practices among the citizenry. Articles and advertisements that were previously culturally sanctioned in periodicals, films that experimented with elements of America’s racial dilemmas, and integration in professional sports beginning in the late 1940s show both challenges and advances reflected in society at the time.

There will be some rotation of the items in the exhibit. Some rotations will be page turns, while others will show different approaches to legislation and enforcement between jurisdictions. One example: there are two pamphlets that assist in the story about the role that a location had played in the kind of legislation available to civilians. One pamphlet from the state of Michigan has a compelling and colorful cover that poses a question “Will this be Michigan’s welcome?,” while illustrating a group of white men approaching a sign at an establishment that reads “Only White Christians Need Apply.” The impact of this pamphlet cover is irreplaceable, but it will be rotating with–and juxtaposed by–a pamphlet from the city of Cleveland that showcases the progress the Community Relations Board, the first of its kind, had achieved to charter fair employment practices. Both of these pamphlets demonstrate the level to which each jurisdiction sought to legislate, with Cleveland finding success at the municipal level, and Michigan struggling to achieve legislation statewide, where it took another 10 years before fair employment practice legislation was passed.

To accompany the exhibit, a small collection of new books will be added to the Industrial Relations Section reading room, where the exhibit is located. Two of the books provide some background about the Brotherhood of Sleeping Car Porters, a Black-led labor organization that heavily influenced Roosevelt to issue Executive Order 8802, from which the content of this exhibit stems.

Those interested in and/or studying American history, labor economics, U.S. politics, law, domestic policy, African American history, and civil rights will benefit from visiting this new exhibit. While Jefferson’s initial hope was that there was more content inclusive of women in the labor force, she highlights the content about Title VII, including a pamphlet, women’s labor history books near the display, and the film reel that includes the posters and trailer for “Pinky, 1949” would be of interest to feminist studies scholars.

“While some progress has been made with the Civil Rights Act and the Equal Employment Opportunity Commission, the historic matter of workplace discrimination and pay equity continue to persist.” said Jefferson.

Boustan concluded, “We hope visitors to our exhibit will gain an increased appreciation for the ongoing struggles for equity on the job, be inspired to learn more, and discover how they can make their own contributions towards removing barriers through effective policies, legislation, and study.”

“Step by Step: The March Towards Equal Employment Opportunity” will be on display from February 3, 2022 through August 1, 2022 in the Industrial Relations Section in the Louis A. Simpson Building at Princeton University. Discover more about "Step by Step" through PUL's online exhibition.

Check out the “Discrimination in Employment” LibGuide.

Find out more about the Industrial Relations Section and its current research interests.