“They had a really interesting Library.” - Yü Ying-shih

Yü Ying-shih (余英時), Emeritus Professor of East Asian Studies and History, Princeton University, passed away on August 1st, 2021 at the age of 91. He was widely regarded as the most influential intellectual historian of China of his generation. Renowned for his mastery of sources for Chinese history and philosophy, his ability to synthesize them on a wide range of topics, and for his advocacy for a new Confucianism, the Chinese social media around the world lit up with accolades when that news was released the following Wednesday evening, including statements by the President of Taiwan. 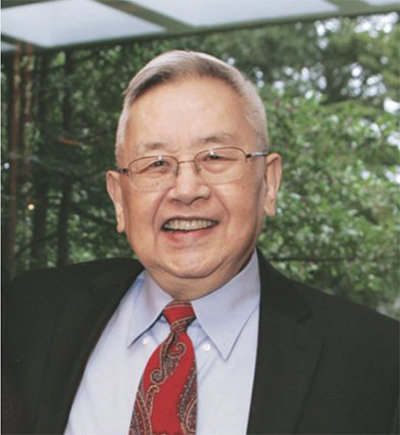 Professor Yü had also taught in Hong Kong, and had been a tenured professor at Harvard University, Yale University, and Princeton University, while he was since 1974 a Fellow of the Academia Sinica, Taibei. He retired to Emeritus status in 2001.

Among his many accolades, Professor Yü was elected to the American Philosophical Society in 2004. He was awarded the John W. Kluge Prize of the Library of Congress for lifetime achievements in the study of humanity in 2006. He was also the inaugural winner of the Tang Prize in Sinology in 2014, awarded by the Academia Sinica, “for his mastery of and insight into Chinese intellectual, political, and cultural history with an emphasis on his profound research into the history of public intellectuals in China.” He used this grant to establish the Yu Ying-shih Fellowship for the Humanities. He also has an asteroid named after him.

Throughout his life, he advocated for the promotion of enlightened values and democracy for the Chinese world, based upon Chinese tradition. His status as the foremost Chinese public intellectual of his generation made him a frequent commentator on democracy movements in Taiwan and Hong Kong, and made him also admired, widely read, yet censored and finally banned in Mainland China. Trained in both Chinese and Western historical scholarship, he consistently brought a comparative lens to his work, drawing as easily from Thucydides, Max Weber, and Peter Burke as from Sima Qian, Dai Zhen, and Hu Shi in his discussion of history and philosophy. This deep knowledge of Western civilization which he used in his comparisons gave his opinions even more weight.

Born 1930 in Tianjin, Professor Yü originally received a traditional education in rural China, sent, with the start of WW II in 1937, away from the Western influence of the cities. This prepared him for a sympathetic understanding of traditional China rarely shared by others among his contemporaries.

Professor Yü came to the US as part of a refugee program in 1955, originally to Harvard University as a visiting scholar, then as a student who obtained his PhD there in 1962; during that time, Hu Shi, who had just vacated his position at Princeton, learned about Yü Ying-shih from the latter’s father. Professor Yü would go on to head the New Asia College in Hong Kong, before becoming a tenured professor at Harvard, Yale, and in 1987, Princeton. In a 2006 interview he replied to the question, on why he moved to Princeton, “They had a really interesting library.”

After his retirement in 2001 he remained involved locally with the department, together with his wife, Monica Shu-p’ing Ch’en Yü.

After the Tiananmen Square protests in 1989, Professor Yu strongly supported Princeton’s initiative to take in exiled Chinese intellectuals. As one such scholar said, “For Chinese intellectuals, no visit to the U.S. is complete without a pilgrimage to Dr. Yü. He is our icon.”

He wrote more than 30 different books (some republished in various editions, targeting the different Great China regions.) Some of these are currently on display in a small exhibition in the East Asian Library entry hallway, put together quickly by EAL staff and PUL’s Exhibition Services specialists. They ranged extremely widely, both chronologically and in subject, and were written in both Chinese and (less frequently) English. The relevance of the liberal side of Chinese Confucian values (there was another side!) for current times remained a thread throughout, as well as the responsibility of a scholar to promote those values. In 2014 his works were banned, once again, in Mainland China.

Shown in the exhibition are the following books under these labels: 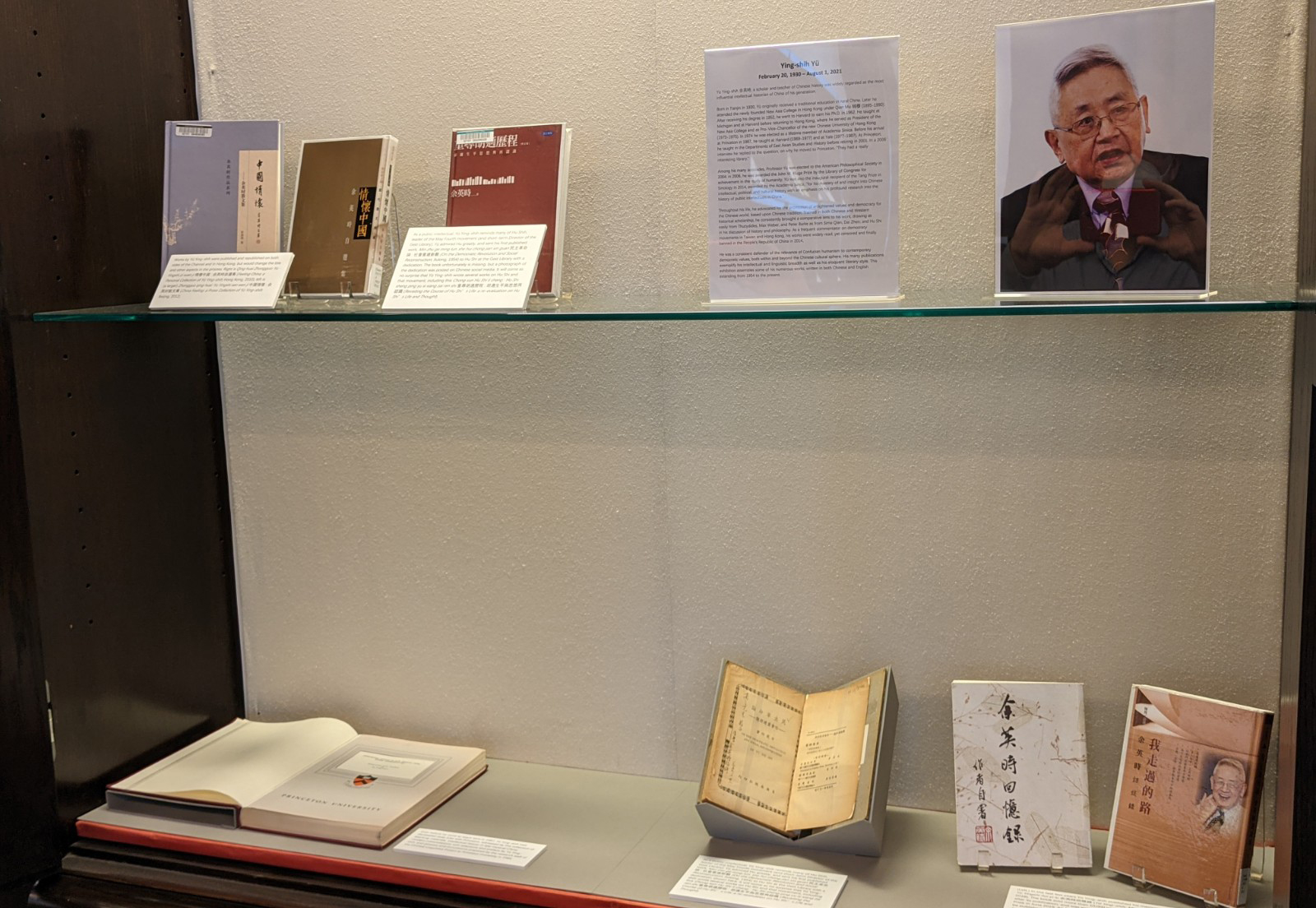 1-2.  Yü Ying-shih was not one to shy away from big topics. Shown are Zi you yu ping deng 自由與平等 (Liberty and Equality; Taizhong, 1984) and Democracy, Human Rights and Confucian Culture (Oxford, 2000).

4. In addition to his numerous Chinese articles, Yü Ying-shih also published in English. Edited and put into context by Josephine Chiu-Duke and Michael S. Duke, many were republished into two volumes as Chinese History and Culture by Columbia University Press in 2016, dedicated to his wife, Monica Shu-p’ing Ch’en Yü.

5. Even before he came to teach here in 1987, Yü Ying-shih had developed close links with Princeton, witnessed by a collection of teaching materials, Intellectual history in late imperial China: modern interpretations, with selections and preface by Yü Ying-shih, and glossary and annotations prepared by the research staff of the Chinese Linguistics Project at Princeton University in 1984.

6. The embeddedness of Yü Ying-shih in Princeton is shown by a volume of articles published on the occasion of the retirements in 1987 of the founders of Chinese Studies at Princeton, Frederick W. Mote and Ch’en Ta-tuan, The Power of culture: studies in Chinese cultural history (Hong Kong, 1994), coedited with Willard J. Peterson and Andrew Plaks.

7-8. In the past few years Yü Ying-shih published his memoirs as Yu Yingshi hui yi lu 余英時回憶錄 (Yü Ying-shih: Memoirs; Taibei, 2018). The book sold more than 10,000 copies in the first month after its publication, and was awarded the twelfth Hong Kong Book Prize in June 2019. An English translation of his memoirs is about to be published by Cambria Press as From Rural China to the Ivy League: Reminiscences of Transformations in Modern Chinese History.

A previous similarbook was based upon an extended interview by Chen Zhi, and was published in Taibei in 2012 as Wo zou guo de lu: Yu Yingshi fang tan lu 我走過的路: 余英時訪談錄 (The Road I took: Interviewing Yü Ying-shih).

9. As a public intellectual, Yü Ying-shih reminds many of Hu Shih, leader of the May Fourth movement (and short-term Director of the Gest Library). It will come as no surprise that Yü Ying-shih wrote several works on Hu Shi and that movement, including this Chong xun Hu Shi li cheng: Hu Shi sheng ping yu si xiang zai ren shi 重尋胡適歷程: 胡適生平與思想再認識  (Revisiting the Course of Hu Shi’s Life: a Re-evaluation on Hu Shi’s Life and Thought).

10. The East Asian Library is happy to have been recently alerted to this hand-written dedication to Hu Shih in Yü Ying-shih’s first written book, Min zhu ge ming lun: she hui chong jian xin guan 民主革命論: 社會重建新觀 (On the Democratic Revolution and Social Reconstruction; Jiulong, 1954). It probably was sent to the Gest Library in 1956. Hu Shih did meet the young Yü, already seen as a prodigy, when he was a student at Harvard.

11. Yü Ying-shih’s works were frequently published and republished in Taiwan, Hong Kong, and, when the time was ripe, in Mainland China. One of the largest collections was this 12-volume set Yu Yingshi wen ji 余英时文集 (Works by Yü Ying-shih) published in 2014 by the academic Guangxi Normal University Press in Guilin, as a revision of a smaller set in 2004. It was edited by Shen Zhijia. Permissions to be published in mainland China would continue to vary widely depending on the political circumstances; his renown remained the higher.

12. Yü Ying-shih was a student of the famous Chinese modern historian Qian Mu. This is one collection on Yü Ying-shih’s writing on Qian Mu, published in Guilin in 2006, Qian Mu yu xian dai Zhongguo xue shu 钱穆与现代中国学术 (Qian Mu and the Modern Academic Study of China), based upon an earlier work published in 1991. Yü would be linked with Chen Yinke and Qian Mu as part of the “New Song Studies.”

15. Yü Ying-shih’s large circle of friends may be exemplified by this 2-volume set: Hui you ji: Yu Yingshi xu wen ji 會友集: 余英時序文集 (A Gathering of Friends: a Collection of Prefaces by Yü Ying-shih; Taibei, 2010), edited by Peng Guoxiang.