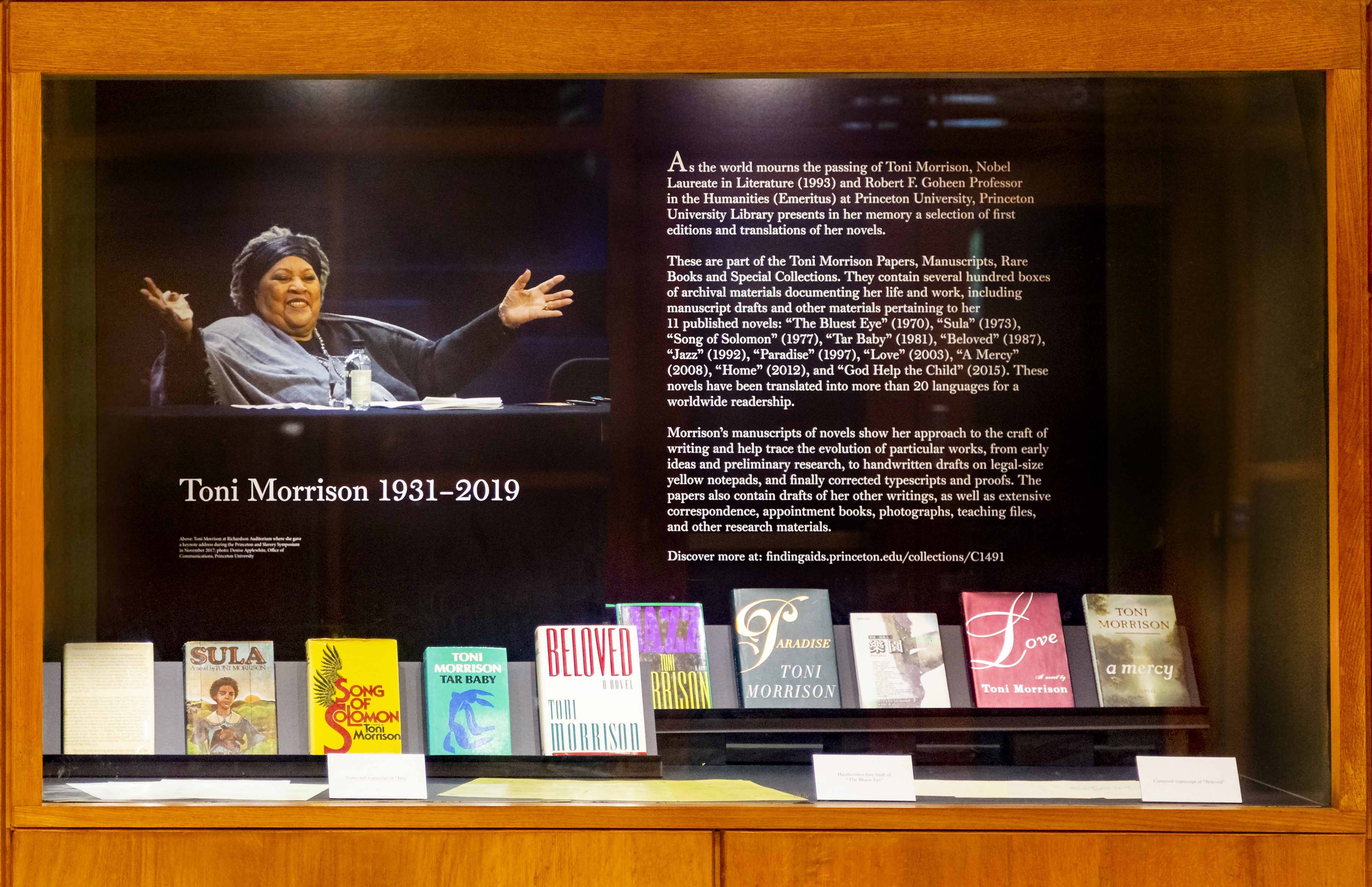 “Freeing yourself was one thing, claiming ownership of that freed self was another.” – Toni Morrison, Beloved (1987)

As the world mourns the passing of Toni Morrison, Nobel Laureate in Literature and Robert F. Goheen Professor in the Humanities, Emeritus, at Princeton University, Princeton University Library presents in her memory a selection of first editions, translations, corrected typescripts, and a handwritten first draft of her novels, on display in the Firestone Library lobby. On Monday, August 5, the internationally renowned writer passed away at age 88.

The exhibition is a tribute to her profound legacy and impact on writing, culture, and beyond. The materials on display are part of the Toni Morrison Papers, which are permanently housed in PUL’s Special Collections.

Among the iconic author and professor’s many literary awards and honors over the past five decades were the National Book Critics Circle Award for “Song of Solomon” and a Pulitzer Prize in Fiction for “Beloved,” which the New York Times described as “the best work of American fiction of the last 25 years.” In 1996, Morrison also gave the Jefferson Lecture in the Humanities, established by the National Endowment for the Humanities, and her international honors include Commandeur de l’Ordre des Arts et des Lettres in 1993 and Ordre National de la Légion d’Honneur in 2010. When she was awarded the Nobel Prize for Literature in 1993, the jury noted that the author, “in novels characterized by visionary force and poetic import, gives life to an essential aspect of American reality.”

Her impact went far beyond her writing. At Princeton, she held the Robert F. Goheen chair in the humanities from 1989 until her retirement in 2006. She created and developed the Princeton Atelier in 1994, bringing together undergraduates in interdisciplinary collaborations with acclaimed creative artists and performers, such as Gabriel García Márquez, Yo Yo Ma, Peter Sellars, and the American Ballet Theatre. In May 2012, President Barack Obama presented her with the Presidential Medal of Freedom.

In 2014, when Princeton University President Christopher L. Eisgruber announced that Princeton would be the permanent home of the Toni Morrison Papers, he said, “We at Princeton are fortunate that Professor Morrison brought her brilliant talents as a writer and teacher to our campus 25 years ago, and we are deeply honored to house her papers and to help preserve her inspiring legacy.”

Toni Morrison was born Chloe Ardelia Wofford in 1931 and acquired her love of books, reading, and storytelling in her native city of Lorain, Ohio. She received a bachelor’s degree from Howard University in 1953 and a master’s degree in American literature from Cornell University in 1955.