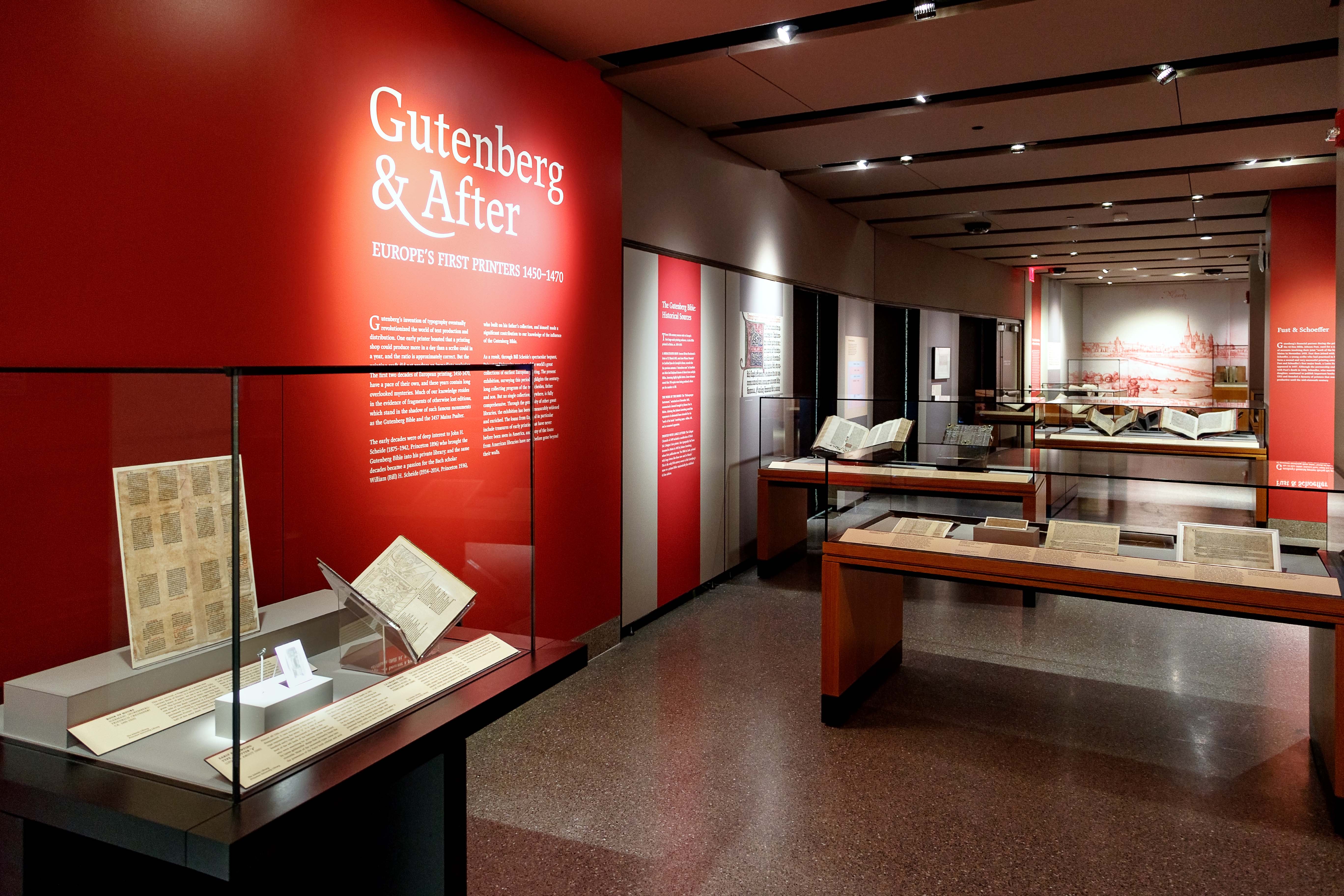 Gutenberg & After: Europe's First Printers 1450-1470, the new exhibition in the Ellen and Leonard Milberg Gallery, tells the story of the two decades that transformed text production and distribution across Europe. Photo by Shelley Szwast

In 2015, bibliophile, philanthropist, and 1936 Princeton University alumnus William H. Scheide bequeathed to Princeton his rare book library, including one of the world's greatest collections of early European printing. Today, a new exhibition opens in the Ellen and Leonard Milberg Gallery, “Gutenberg & After: Europe’s First Printers 1450-1470,” showcasing the Scheide collection alongside treasures borrowed from nine leading institutions in the United Kingdom and North America.

The exhibition tells the story of the two decades that transformed text production and distribution across Europe. It is the first exhibition to focus on the inaugural years of the spread of printing.

The cornerstones of the exhibition are the Gutenberg Bible of 1455 and the 1457 Mainz Psalter, both from the Scheide Library. These two earliest datable printed books are contextualized by a careful selection of other early European printing that documents both Mainz printing even earlier than the Gutenberg Bible, and the spread of printing to other towns, including Strasbourg, Bamberg, Rome, Venice, and Paris. 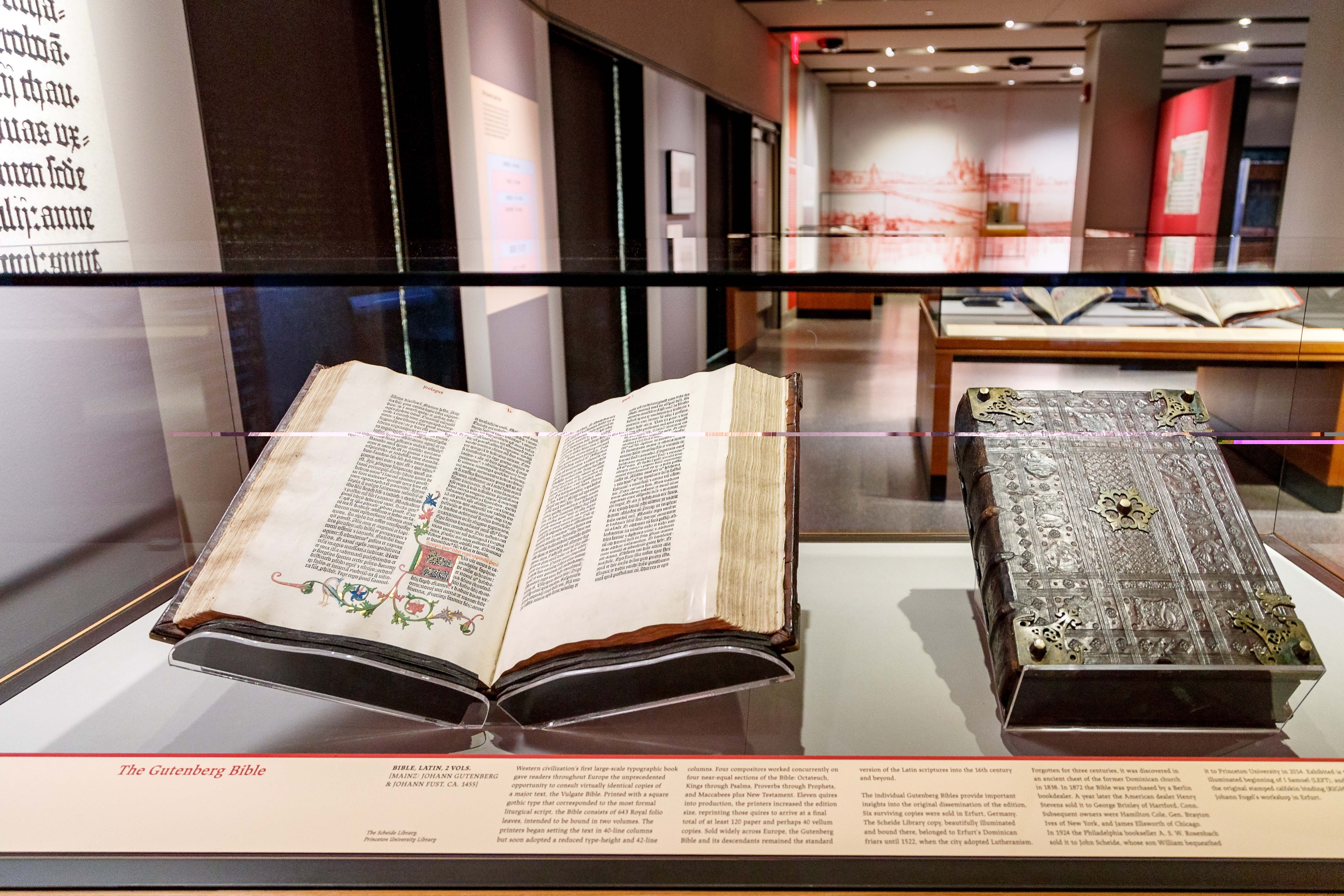 One of the cornerstones of the exhibition is the Gutenberg Bible of 1455, which is held in the Scheide Library. Photo by Shelley Szwast 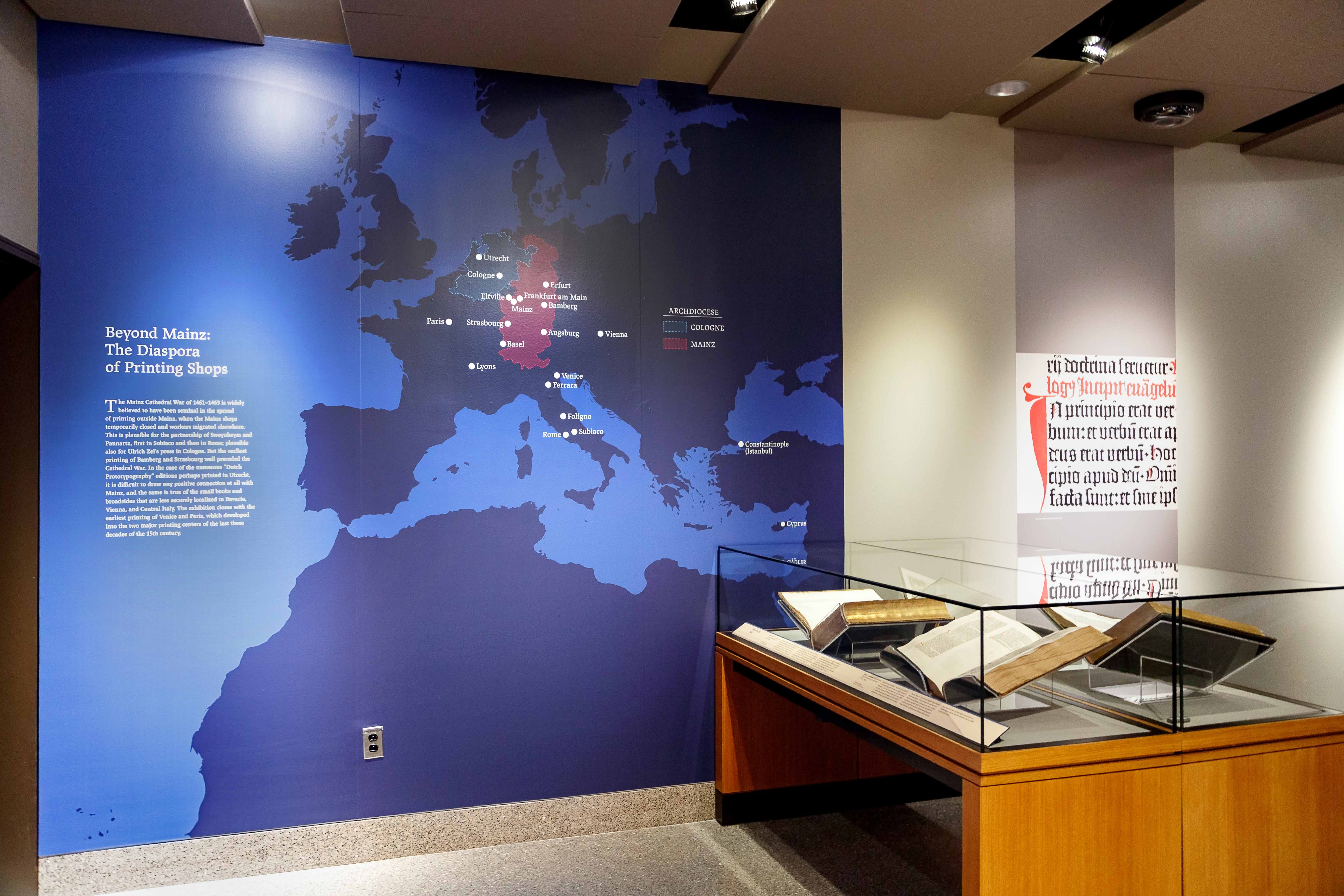 This map, on display in the exhibition, shows the diaspora of printing shops beyond Mainz. Photo by Shelley Szwast, Princeton University Library

"The Scheide Library holds a wide range of unique and nearly unique early printings," said Scheide Librarian and exhibition curator Paul Needham. "But when we were considering how to present the wealth of the Scheide bequest, it occurred to us that the best way would be not simply to rely exclusively on its holdings, but to deepen and enrich the exhibition with a focused selection of related treasures from other libraries."

"This is a historic exhibition, because it brings so much together in America that hasn't been seen before," said Eric White, Curator of Rare Books and also an exhibition curator. "There are both world-famous and important but less-familiar books. Combined, they tell the story of the earliest European printing in a way that hasn't been attempted before." 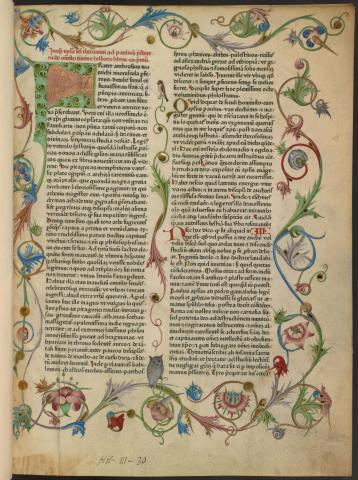 Besides Princeton’s collections, loans hail from Cambridge University Library, the John Rylands Library of the University of Manchester, the Devonshire Collections in Chatsworth House, Columbia University Library, the Burke Library at Union Theological Seminary, the Morgan Library & Museum, New York Public Library, the Newberry Library, and the Bridwell Library of Southern Methodist University. The loans from England include rarities that have never before been seen in America, and a number of loans from American libraries have never before gone beyond their walls.

In the first half of the exhibition, visitors to the gallery will walk through the chronological story of early printed-book production in Mainz. As they take a turn into the second half of the gallery, they will encounter the spread of printing through Europe, featuring first editions of books by authors central to western culture, such as Virgil, St. Augustine, and Dante.

On display through December 15, the exhibition will be open to the public daily from noon to 6 p.m.

An online version of this exhibition, with digitized images and detailed descriptions, will be made available on dpul.princeton.edu.