Inside the Milberg Gallery: Indulgences

This series highlights collections included in the "Gutenberg & After: Europe's First Printers 1450-1470" exhibition, now open through Dec. 15 (daily, noon to 6 p.m.) in the Ellen and Leonard Milberg Gallery. To follow is a note from Eric White, Curator of Rare Books:

As visitors to “Gutenberg & After” will discover at the beginning of the exhibition, Europe’s earliest printing project was not the majestic Gutenberg Bible of 1455. Instead, the first things Johann Gutenberg and his colleagues printed were relatively ephemeral pamphlets, broadsides, schoolbooks, and indulgences. Among these, the small single-leaf indulgences are the most historically important because of their far-reaching impact on the Christian world. Even before the Turkish capture of Constantinople in May 1453, Pope Nicholas V had granted a plenary indulgence to raise funds to aid the besieged Latin Kingdom of Cyprus. The Cypriot noble Paulinus Chappe travelled to Europe to organize indulgence sales, which began in early 1454. Evidently the production of handwritten indulgences proved too slow, and Europe’s first printers, located in Mainz, Germany, were enlisted to produce them in extensive editions.

Printed on vellum with moveable types in oblong format, the indulgences were issued to great numbers of Christian believers, in exchange for monetary donations, as promissory notes for the forgiveness of their sins. These spiritual transactions hold particular interest for modern historians of printing because the indulgence forms stand so close to the origins of European printing, and as notarized documents, they are closely datable and localized to specific towns, often far from Mainz. 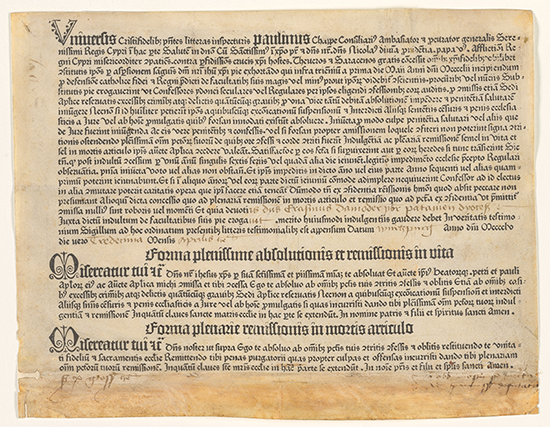 The earliest specimens are the so-called 31-line indulgences, in which the main text was printed with a small rounded typeface, much larger Gothic types for brief headings, and a trio of larger metal-cast initials. Spaces within the text were left blank for the handwritten addition of the individual purchaser’s name and hometown and the precise day of the month of purchase – immediately preceding the printed digits of the year of issue, ‘Mccccliiii’ [1454] in some copies, ‘Mcccclv’ [1455] in others. A surprisingly large total of fifty 31-line Cyprus indulgences survive, issued within the archdiocese of Mainz and its vicinity. The Morgan Library & Museum has lent its specimen, issued to Erasmus Damoder in Würzburg on 13 April 1455. Although the small type was never used again (it may have been melted down to prohibit forgeries), the large Gothic type appeared in many editions of the Latin schoolbook known as the Donatus, and in several calendars and other ephemeral works.

Nine additional copies of the same Cyprus indulgence text survive, consisting of only 30 printed lines. These feature a different small text type, headings in a Gothic typeface that is slightly shorter and narrower than those of the 31-line editions, and a set of three different metal-cast initials. The 30-line indulgence has never before been seen in America. The specimen on exhibit, lent by the University of Manchester’s Rylands Library, bears the printed date ‘Mccccliiii’ [1454], corrected in manuscript when it was issued to George and Frederica Arnsbergh in Cologne on 27 February 1455, while eight others were printed to read ‘Mcccclqui[n]to’ [1455]. These indulgences were issued within the archdiocese of Cologne during the three months prior to the expiration date of 30 April 1455. Again, the small type was never used again. The Gothic heading type, however, is famous today as the type of the Gutenberg Bible. 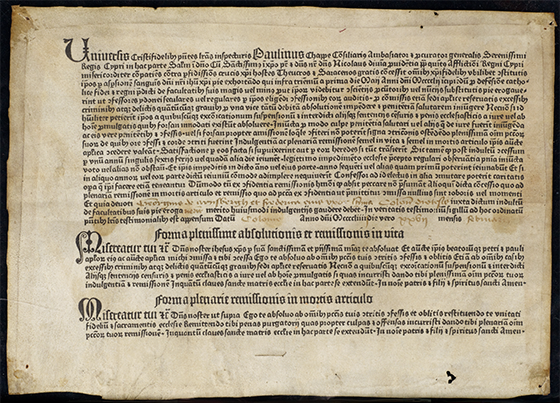 A fragmentary 31-line indulgence acquired by the Scheide Library in 2004, featured in the exhibition, is of special importance. The handwritten information entered into the appropriate blank spaces left in the printed form show that the indulgence was issued to Margaretha Kremer and her son Johann at Erfurt on 22 October 1454 – the earliest firm date we possess for the existence of European printing.

Tags:
Inside the Milberg Gallery: Gutenberg & After