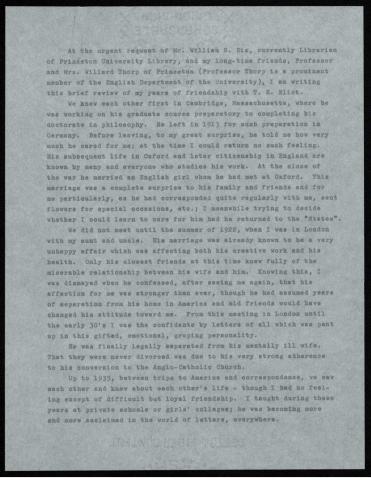 In early March 1957, “at the urgent request of Mr. William S. Dix” (Princeton University Librarian), educator and dramatist Emily Hale drafted a review of her relationship with poet T.S. Eliot to accompany the collection of letters she donated to the Princeton Library in 1956. Completed in 1965 with the editorial support of Dix, and her long-time friends Princeton English Professor Willard Thorp, and journalist Margaret Thorp, she chronicled her relationship with the famous poet, describes the “unnatural code that surrounded us” as well as expressed her hope that through the letters’ release “at least the biographers of the future will not see this ‘a glass darkly’ but like all of life ‘face to face.’”

Upon learning of Hale’s donation of his letters to Princeton, T.S. Eliot drafted his own review of his relationship with Hale. That text can be found on Harvard’s Houghton Library Blog (see here).

Per the agreement Hale made with the library upon her donation, the material in the Emily Hale Letters from T.S. Eliot had been sealed for fifty years following her death. On January 2, 2020, these items were made publicly available and are now open to view by all patrons.

READ HALE'S FULL NARRATIVE AND MORE on the Manuscripts blog.