Inside the Hellenic Collections: Photography 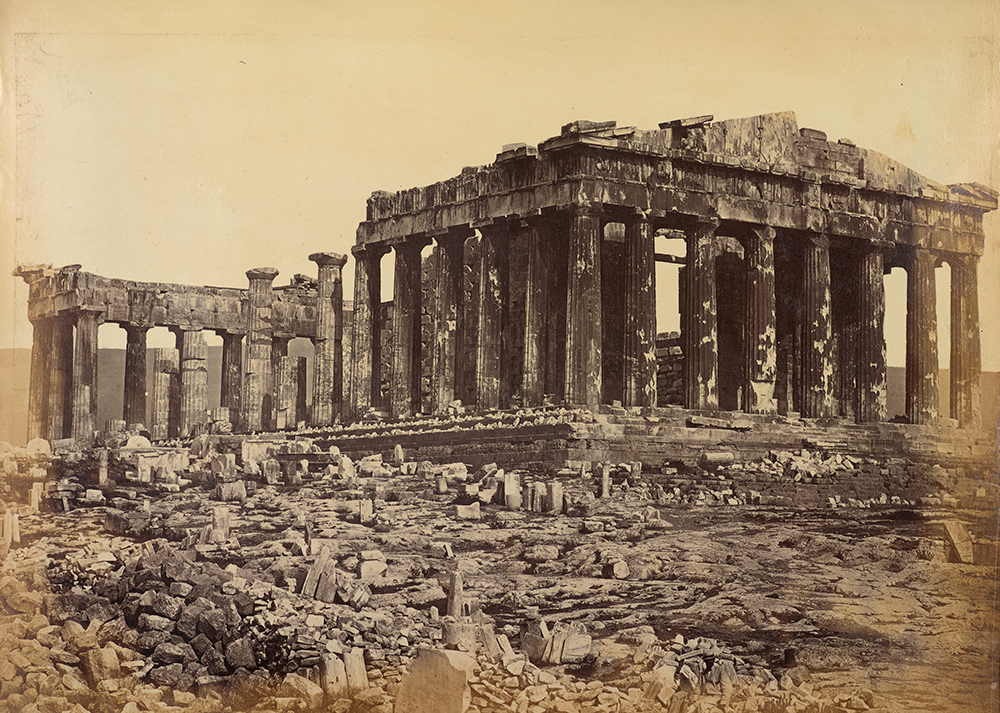 A photograph of the Parthenon in Athens, Greece from Princeton University Library's Hellenic Collections (1867-1870s?).

Forty years ago, a gift from Stanley J. Seeger Jr. ’52 transformed Hellenic studies at Princeton University. This series highlights the impact of Seeger’s gift on the collections of Princeton University Library and the research opportunities they afford.

In "Athens, Still Remains," Jacques Derrida meditates on photography and the photographic medium in relationship to the history of philosophy. The book intertwines a commentary on Jean-Francois Bonhomme’s photographs of the Acropolis and its surroundings with an autobiographical recollection of Derrida’s trip to Greece in 1995. Photography, as Derrida reminds us, is a modern word derived from an eminently Greek construct (“photos,” light, and “graphein,” drawn or write) that means “the writing of light.” The photographic medium prompts us to ask new questions about art in the age of its technological reproducibility, and also to reframe in our own time contemporary questions about time, truth, revelation, and knowledge whose distant roots date back to the philosophical tradition of ancient Greece.

Princeton University Library's Hellenic photograph collections reflect the essential relationship, not only of photography to the making of modern Greece, but also, and especially, of Greece to the history of photography. A series of strategic acquisitions made possible by the generosity of the Stanley J. Seeger Hellenic Fund has allowed Princeton to house extraordinary visual resources that testify to the meanings of photography as both art and archive.

Greece attracted early photographers who were fascinated with the ruins of the extinct civilization of classical antiquity. “I had already admired the beauties of the Acropolis in detail when I went there with my daguerreotype camera," wrote Pierre-Gustave Joly de Lotbinière, the first photographer to portrait the Parthenon in 1839. "I was greatly confused by the need to choose among so many masterpieces, I turned my camera first one way and then another. In the end, the position of the sun led me to decide on the view of the Propylaea, that marvelous gateway which is a worthy introduction to the wonders of the Acropolis.”

In portraying antiquity, they engaged in practical and theoretical experiments with the photographic medium that over time contributed to shaping the developments of modern photography. 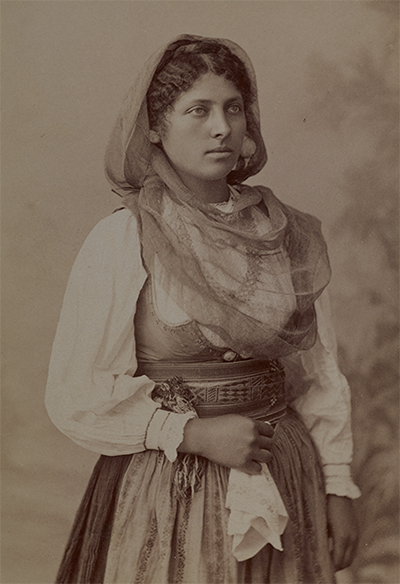 A portrait of a woman from Corfu in traditional dress by Greek photographer A. Kasphikis (1890).

The Early Photographs of Greece (1852-1984) is an open collection of photographs focused on a wide range of sites and subjects in Greece. The collection spans the early stages of calotypes, albumen prints, lantern-glass slides, and early photographs of Greek antiquities, from the ethnographic archive of Greek people portrayed in their traditional costumes to the emergence of humanitarian photography in Axis-occupied Greece during World War II.

A distinct feature of this and other photographs collections at Princeton consists of unique panoramas of Athens and late Ottoman port-cities such as Salonika, Smyrne, and Constantinople.

In addition, the rich and varied collection of portraits of men and women, as well as of families, and people in the streets of Greek and late Ottoman cities document the transition from the traditional attire to European dress. These and other photographs make legible the cultural and social change that characterized the transition of Greece and the Balkans from the Ottoman Empire to nation states, in conjunction with the influence of European colonialism.

Princeton's collections feature the individual work of prominent Greek and world photographers – important personalities of artists and intellectuals such as, among others, the Greek photographers Konstantinos Athanasiou, A. Kasphikis, Dimitris Konstantinou, Petros Moraites, the Rhomaides Brothers, Konstantinos Dimitriou, and Philippos Margarites; the Italian Bartolomeo Borri, and Fratelli Alinari; the French Felix Bonfils; the Austrian Alois Beer; and the Swiss Frédéric Boissonnas.

By pointing their lenses on the Parthenon and other Greek temples, photographers played a decisive role in the interpretation of antiquity. The fact that photography developed at the same time of archaeology enhanced the documentary value of the new medium, and at the same time produced iconic images of legendary ancient towns, such as Athens, Piraeus, Eleusis, Marathon, Mycenae, Delphi, Corinth, Sounion, Epidaurus, Olympia, Knossos, Kos, Corfu, Sparta, Thebes, Plataea, Salamis, Hērakleio, Nauplion, Argos, Lindos, Thera, and Salonika.  Disseminated by postcards, magazines and books, these images turned remote places in Greece and the Eastern Mediterranean into familiar destinations of mass tourism.

The photographic medium brought into one single frame of reference Romantic melancholy and new notions of authenticity, permanence, and realism. The preoccupation with traces of the remote historical past of antiquity was never disjointed from contemporary concerns with modernity and its origins. By monumentalizing Greek antiquities, and the exotic Mediterranean landscapes of their background, photography evoked the myth of classical Greece as the golden age of human civilization, one that had supposedly flourished in harmony with the state of nature before the corruption and decadence of history.

Similarly, the vast and powerful Byzantine civilization attracted 19th- and early 20th-century photographers who traveled to the secluded monasteries of Mount Athos, the epicenter of Eastern Orthodox monasticism, the Holy Monasteries of Meteora, and the Monastery of Saint John the Theologian in Patmos and Mistra. Their photographs detail the cultural heritage of important Byzantine and post-Byzantine monuments in Greece and the Aegean. 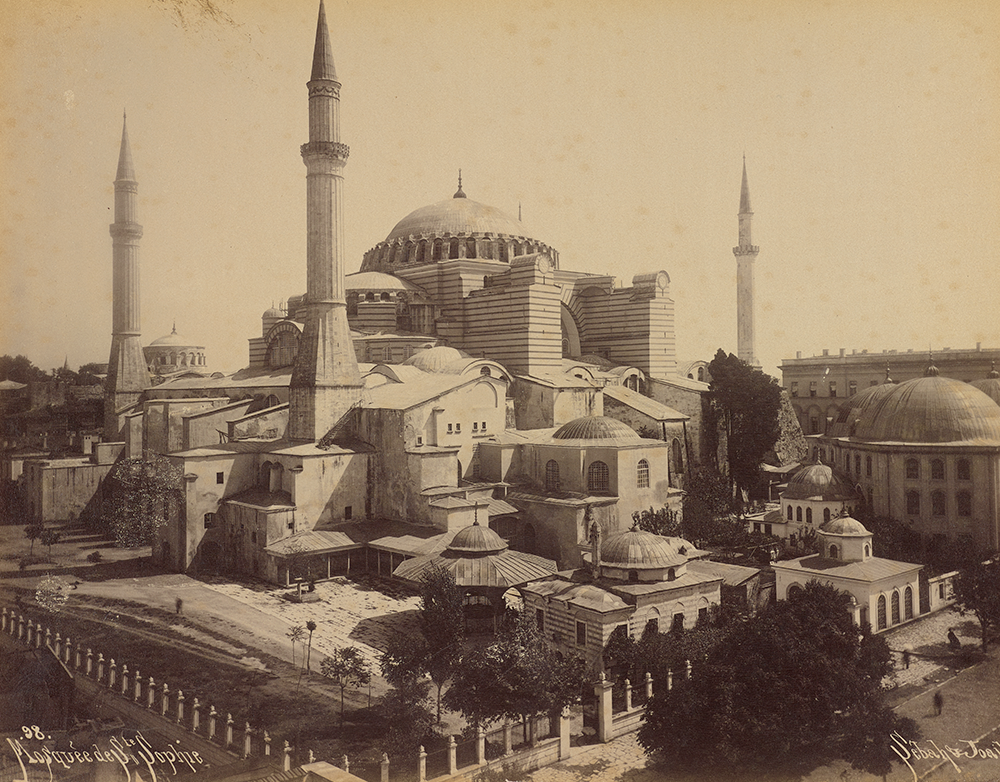 A photograph of the Hagia Sophia in Constantinople from Sebah's and Joaillier's album (1885).

Princeton's Hellenic Photographs Collections exceed in scope and focus the geographical boundaries of modern Greece, to include a vast array of visual materials related to the Ottoman Mediterranean and the Middle East, from Turkey, Egypt, and Syria, to Palestine and Lebanon. Ancient Greek cities in Asia Minor such as Constantinople, Miletos, Ephesus, Bursa, and Smyrna, along with prominent Byzantine monuments like Haghia Sophia, and Christian antiquities in Bethlehem and Jericho, became favorite themes of world-known photographers including, among others, L. Fiorillo, Abduallah Frères, M. Iranian, Rubellin et Fils, Sebah and Joaillier, and Felix Bonfils.

Photographs produced in Greece during the 19th century retain an invaluable documentary value for studies focusing on modern Greek topography, architecture, and archaeological excavations. Captured on camera are the transformation of the Greek countryside, the construction of modern roads and railroads, and the increasing presence of foreign tourists. At the turn of the century, improvements in photographic technology allowed travelers to document and disseminate images of their journeys to Greece, opening a new era in the history of photography and cross-cultural exchanges between Greece, Europe, and America.