Inside the Hellenic Collections: The Greek War of Independence 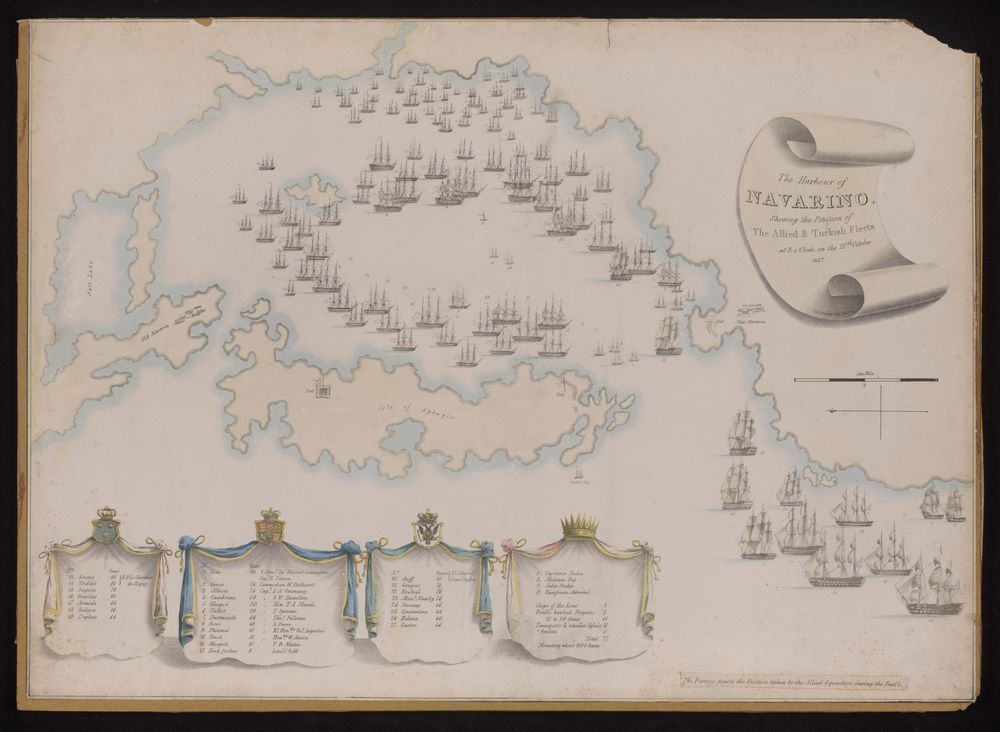 The harbour of Navarino: showing the position of the Allied & Turkish fleets at 3, o'clock, on the 20th October 1827.

2021 marks the 200th anniversary of the Greek War of Independence and so provides a commemorative opportunity to again assess its nature and significance. Though sometimes referred to as the first armed conflict that established the independence of a modern nation state, the struggle was fraught with so many conflicting political interests and so many incidents of both atrocity and heroism that no simple definition or explanation is possible. Whether we prefer to call it a war, a revolution or an insurrection, or whether we consider its political context more regional than national, or its causes more economic than religious, the conflict remains a challenging and often bewildering object of historical study. While the combat itself takes place in the Balkans and in the waters of the Ionian and Aegean seas, from Alexander Ypsilanti’s crossing of the Pruth in February 1821 to the decisive naval Battle of Navarino in October 1827, the struggle for Greek independence begins in 1453 with the fall of Byzantine Constantinople, spans centuries of subjection and assimilation to Ottoman rule, and culminates in the late 18th century with a cultural Greek enlightenment that draws the attention and support of most of Europe. Nevertheless, when the battleships of the European Great Powers finally and unexpectedly destroy the Ottoman fleet in the Bay of Navarino, it is far from clear what had actually been accomplished. The entanglement of ethnic and linguistic communities, the protection of the Great Powers’ commercial interests and the political and sometimes armed conflicts between the Greeks themselves all contributed to the chaotic course of events and continued to plague attempts to form a national government well after the significant fighting had ceased. In spite of these difficulties, the independence of Greece was recognized by all in 1830, and although it labored under the long reign of King Otto, the Great Powers’ chosen regent, in 1864, under a far more democratic monarch and constitution, Greece began to better realize the independence its patriots had sacrificed so much to gain.

In collaboration with the Seeger Center for Hellenic Studies under the leadership of its Director, Dimitri Gondicas, Princeton University Library has amassed a research-worthy collection related to this conflict, including both rarities held in its Special Collections and the circulating works of modern scholarship. This collection is focused especially on manuscript and published personal narratives that form the core of the War’s primary sources. In addition, given that an understanding of the events and major engagements of the War requires an intimate knowledge of their geography, our collection features maps published during the era, of which many have been digitized.

The Gulfs of Patras and Corinth, critical theaters of war. From a map published in Paris in 1826.

The major themes that contributed to the preconditions of the War are well represented, beginning with two of the major  institutions of Greek assimilation under Ottoman rule, the Phanariots, wealthy merchant families who held important administrative positions, and the Janizaries, the elite Ottoman military corps drawn from enslaved Christian youths. The Greek Enlightenment has long been a focus of our collecting, the inspirational movement of Greek intellectuals who did so much to rally the support of Europe, led by Adamantios Koraēs and Velestinlēs Rēgas. The role of the Philikē Hetaireia, the secret political organization that coordinated the War’s initial leadership, has increasingly drawn the attention of scholars. 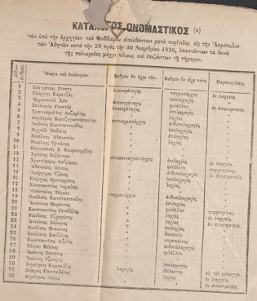 List of Greek soldiers and their current and former ranks, from a report published in 1865 in support of the still living veterans who fought at the Siege of Athens in 1826, demanding both their recognition and back pay.

The great figures of the War itself include the well-known combatants: Theodōros Kolokotrōnēs, the brigand (klepht) hero of the Peloponnese, Geōrgios Karaiskakēs and Odysseus Androutsos, commanders of forces in Roumeli (continental Greece), and Iōannēs Makrygiannēs, whose Memoirs of the War are considered among the classics of Modern Greek literature. Ibrāhīm, Pasha, the Egyptian general who brought the Greeks to the brink of defeat at the Siege of Mesolongion (Missolonghi) also deserves mention, as does the Greek admiral Andreas Miaoulēs, whose naval operations did much to turn the tide again in Greece’s favor.

Important political figures include Mahmud II, the Sultan of the Ottoman Empire throughout the period, Alexandros Maurokordatos and Iōannēs Kōlettēs, Greek leaders whose political careers extended well into the following decades, and Iōannēs Kapodistrias, the first Governor of Greece, who was granted executive powers in 1828 but was assassinated in 1831 by Greek political rivals.

Our collection is particularly strong in the sources and scholarship of Philhellenism, the European and American movement in support of Greek independence, famously led by Lord Byron, who died during the Siege of Mesolongion in 1824 at the age of 36. Our Special Collections possess several contemporary works of Philhellenism, often in the form of occasional poetry, but music is represented as well. 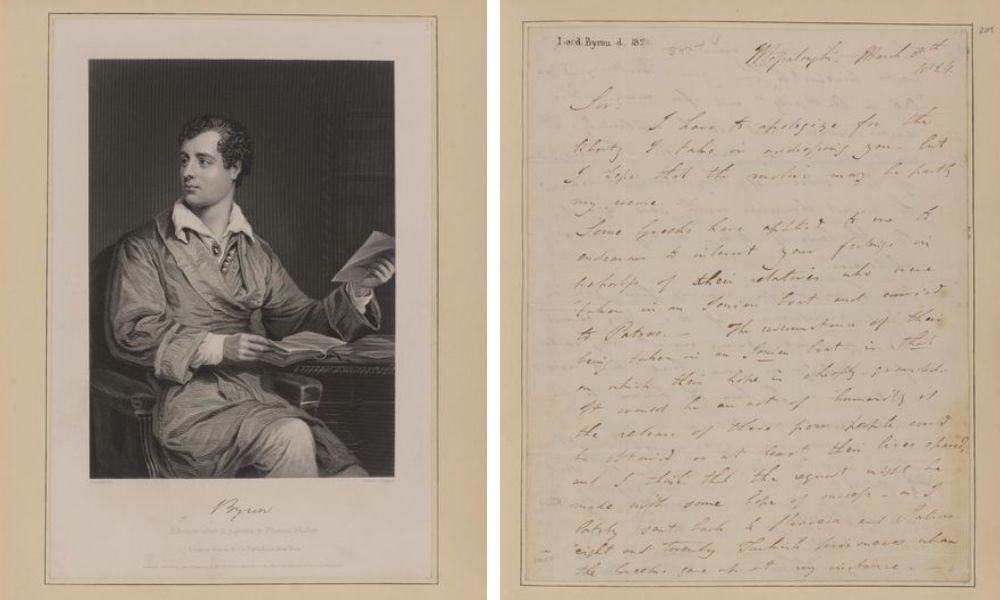 A letter of Lord Byron seeking the release of a boatful of Greeks captured off Patras, dated March 2, 1824, a month and a half before his death. From the Lord and Lady Byron letters.

Finally, our research resources extend to the rich historiography that documents and interprets this period. Beginning with the important Greek works of Iōannēs Philēmōn, Kōnstantinos Paparrēgopoulos and Spyridōn Trikoupēs, our collection extends through those written during the nineteenth and early twentieth centuries, as well as those published during the Junta years of military dictatorship (1967-1974). The excellent work of the last decade, in both Greek and English, deserves to be set apart. It is also not surprising that the War has served as the setting for many lively works of historical fiction. 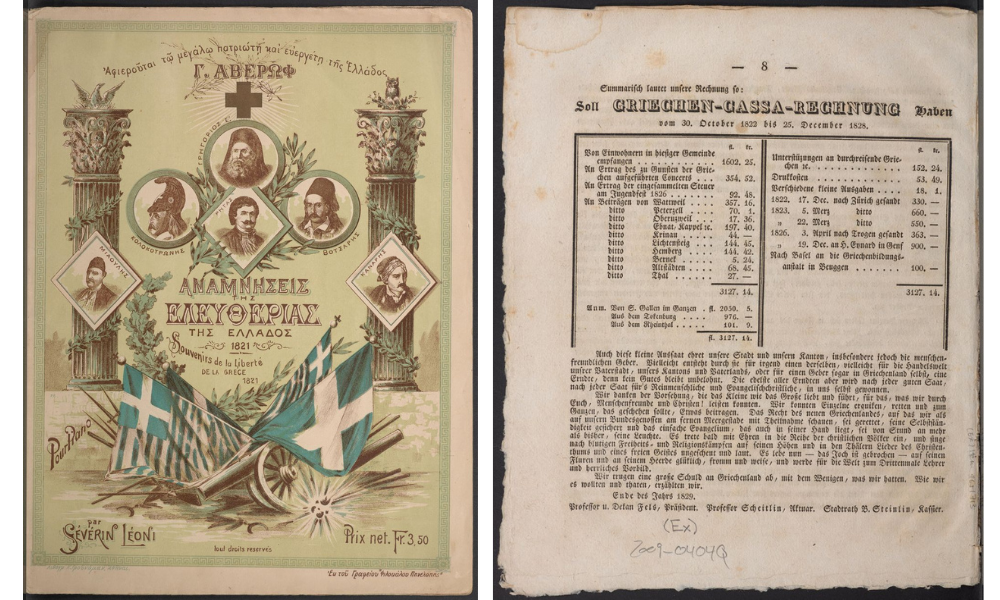