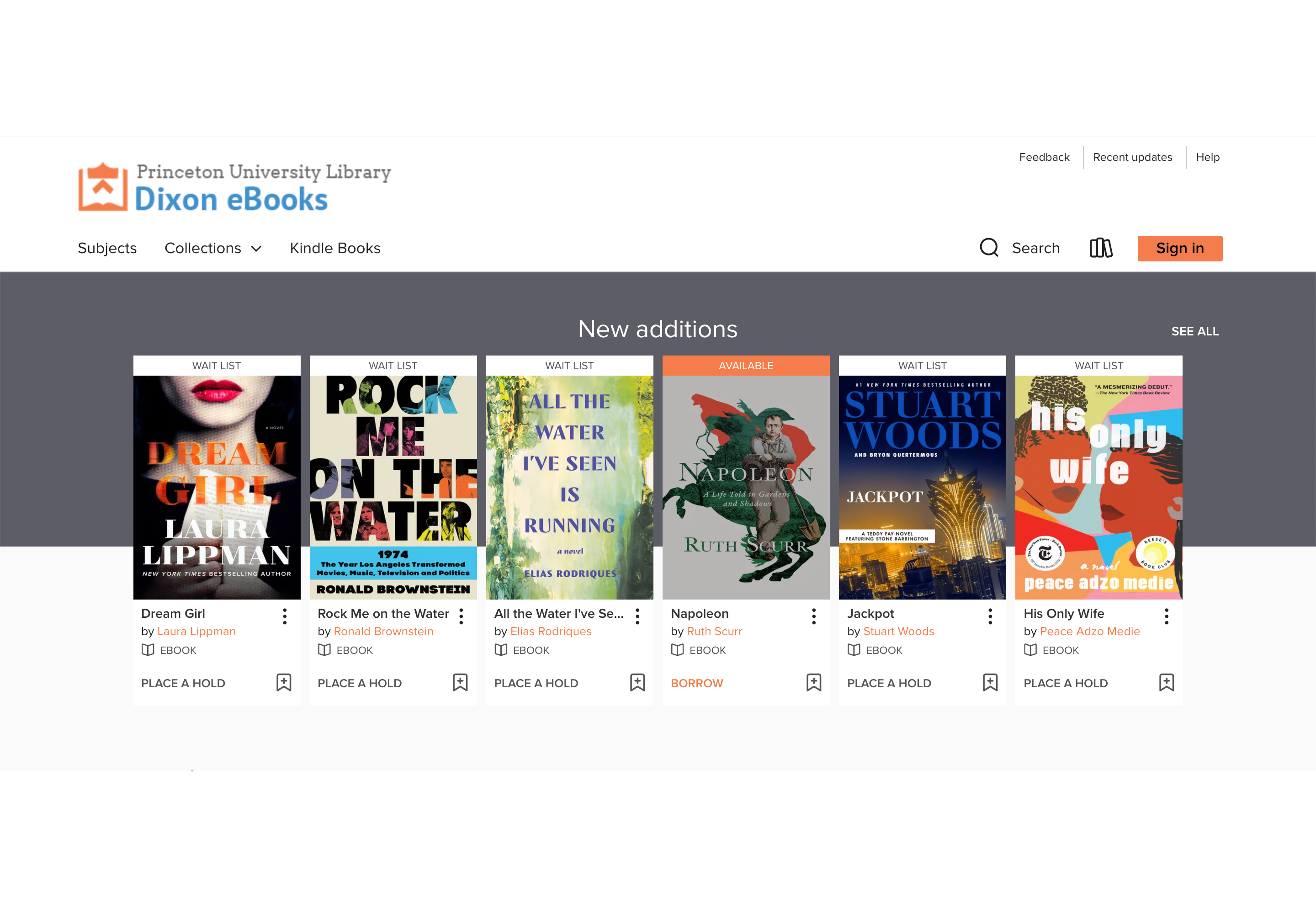 Princeton University Library offers the Dixon eBooks Collection to the Princeton University community. An extension of the print Dixon Collection, this collection has 3,000+ ebooks and audiobooks available for downloading or streaming on your desktop or e-reader, featuring bestsellers, award winners, science and technology titles, popular fiction, history, biographies, and more.

PUL highlights the following books in the collection from a variety of authors and subjects.

We Are Satellites
Sarah Pinsker

From award-winning author Sarah Pinsker comes a novel about one family and the technology that divides them.

Transgressive, transformative short stories that explore the margins of trans lives. Building on the success of All City, here is a wry, and at the same time dark and risk-taking, story collection from author (and baker) Alex DiFrancesco that pushes the boundaries of transgender awareness and filial bonds.

This book of poetry from a British-Ghanaian author follows two Black artists in London and their exploration of love and vulnerability amidst the fear and violence in their lives.

Of Women and Salt
Gabriela Garcia

Garcia’s debut novel is a kaleidoscopic portrait of betrayals—personal and political, self-inflicted and those done by others—that have shaped the lives of these extraordinary women.

There’s No Such Thing as an Easy Job
Kikuko Tsumura

On June 26, 2015, the U.S. Supreme Court ruled that state bans on gay marriage were unconstitutional, making same-sex unions legal across the United States. But the road to that momentous decision was much longer than many know. In this definitive account, Sasha Issenberg vividly guides us through same-sex marriage's unexpected path from the unimaginable to the inevitable.

Punch Me up to the Gods
Brian Broome

Punch Me Up to the Gods introduces a powerful new talent in Brian Broome, whose early years growing up in Ohio as a dark-skinned Black boy harboring crushes on other boys propel forward this gorgeous, aching, and unforgettable debut.

London, 1938. In the suburbs of the city, a young housewife has become the eye in a storm of chaos. In Alma Fielding’s modest home, china flies off the shelves and eggs fly through the air; stolen jewelry appears on her fingers, white mice crawl out of her handbag, beetles appear from under her gloves; in the middle of a car journey, a turtle materializes on her lap. The culprit is incorporeal. As Alma cannot call the police, she calls the papers instead. With characteristic rigor and insight, Kate Summerscale brilliantly captures the rich atmosphere of a haunting that transforms into a very modern battle between the supernatural and the subconscious.

Antitrust enforcement is one of the most pressing issues facing America today—and Amy Klobuchar, the widely respected senior senator from Minnesota, is leading the charge. This fascinating history of the antitrust movement shows us what led to the present moment and offers achievable solutions to prevent monopolies, promote business competition, and encourage innovation.

Appointed by Philip Roth and granted independence and complete access, Blake Bailey spent years poring over Roth's personal archive, interviewing his friends, lovers, and colleagues, and engaging Roth himself in breathtakingly candid conversations. The result is an indelible portrait of an American master and of the postwar literary scene.

They killed my mother.

They took our magic.

They tried to bury us.

Zélie Adebola remembers when the soil of Orïsha hummed with magic. Burners ignited flames, Tiders beckoned waves, and Zélie's Reaper mother summoned forth souls. But everything changed the night magic disappeared. Under the orders of a ruthless king, maji were killed, leaving Zélie without a mother and her people without hope. Now Zélie has one chance to bring back magic and strike against the monarchy. With the help of a rogue princess, Zélie must outwit and outrun the crown prince, who is hell-bent on eradicating magic for good.

Fans of Jacqueline Woodson, Meg Medina, and Jason Reynolds will fall hard for this astonishing New York Times-bestselling novel-in-verse by an award-winning slam poet, about an Afro-Latina heroine who tells her story with blazing words and powerful truth.

The Hate You Give
Angie Thomas

Sixteen-year-old Starr Carter moves between two worlds: the poor neighborhood where she lives and the fancy suburban prep school she attends. The uneasy balance between these worlds is shattered when Starr witnesses the fatal shooting of her childhood best friend Khalil at the hands of a police officer. Khalil was unarmed.

The Passion of Dolssa
Julie Berry

Dolssa is an upper-crust city girl who's been branded a heretic, on the run from the friar who condemned her mother to death by fire and wants Dolssa executed, too. Botille is a matchmaker and a tavern-keeper, struggling to keep herself and her sisters on the right side of the law in their seaside town. When their lives collide by a dark riverside, Botille rescues a dying Dolssa and conceals her in the tavern, where an unlikely friendship blooms. Aided by her sisters and Symo, her surly but loyal neighbor, Botille nurses Dolssa back to health and hides her from her pursuers. But all of Botille's tricks, tales, and cleverness can't protect them forever, and when the full wrath of the Church bears down upon them, Dolssa's passion and Botille's good intentions could destroy the entire village.

At first, high school freshmen Rex McClendon and Leif Nelson believe what they’ve been told: that the students’ strange demises were all just tragic accidents, the unfortunate consequence of succumbing to vices like Marlboro Lights and Nirvana. But when the shoot for their low-budget horror masterpiece, PolterDog, goes horribly awry—and their best friend, Alicia Boykins, is sent to Whitewood as punishment—Rex and Leif are forced to question everything they know about their unassuming hometown and its cherished school for delinquents.

Eager to rescue their friend, Rex and Leif pair up with recent NYU film school graduate Janine Blitstein to begin piecing together the unsettling truth of the school and its mysterious founder, Wayne Whitewood. What they find will leave them battling an evil beyond their wildest imaginations—one that will shake Bleak Creek to its core.

Weaving together American history, dramatic family chronicle, and searing episodes of memoir, Annette Gordon-Reed's On Juneteenth provides a historian's view of the nation's long road to Juneteenth, recounting both its origins in Texas and the enormous hardships that African-Americans have endured in the century since, from Reconstruction through Jim Crow and beyond.

Ariadne, Princess of Crete, grows up greeting the dawn from her beautiful dancing floor and listening to her nursemaid's stories of gods and heroes. But beneath her golden palace echo the ever-present hoofbeats of her brother, the Minotaur, a monster who demands blood sacrifice.

When Theseus, Prince of Athens, arrives to vanquish the beast, Ariadne sees in his green eyes not a threat but an escape. Defying the gods, betraying her family and country, and risking everything for love, Ariadne helps Theseus kill the Minotaur. But will Ariadne's decision ensure her happy ending? And what of Phaedra, the beloved younger sister she leaves behind?

With the same open-hearted generosity that has made his video series a phenomenon, Acho explains the vital core of such fraught concepts as white privilege, cultural appropriation, and "reverse racism." In his own words, he provides a space of compassion and understanding in a discussion that can lack both. He asks only for the listener's curiosity—but along the way, he will galvanize all of us to join the antiracist fight.

Woodward, the #1 international bestselling author of Fear: Trump in the White House, has uncovered the precise moment the president was warned that the Covid-19 epidemic would be the biggest national security threat to his presidency. In dramatic detail, Woodward takes readers into the Oval Office as Trump's head pops up when he is told in January 2020 that the pandemic could reach the scale of the 1918 Spanish Flu that killed 675,000 Americans.

Thinking Inside the Box
Adrienne Raphel

Blending first-person reporting from the world of crosswords with a delightful telling of its rich literary history, Adrienne Raphel dives into the secrets of this classic pastime. Thinking Inside the Box is an ingenious love letter not just to the abiding power of the crossword but to the infinite joys and playful possibilities of language itself.

The collection is accessible through the OverDrive platform, which provides in-browser access and is compatible with most mobile devices and e-readers. Patrons may either download the required software for access on mobile devices or view through a Google Chrome or IE browser.  Five titles may be charged to a patron at any one time for a two-week period. Patrons may also place holds on titles, set up wish lists, and receive reading recommendations. This service is free and open to members of the Princeton University community.

The collection titles can be found through Dixon eBooks or the Main Catalog.

For more information about the collection and how to use it, visit Overdrive Support.