When we hear the word “manga” today, we think of graphic novels: stories that are dramatically narrated through pictures, often in a comic book-like format. The literal meaning of the term manga (漫画) in Japanese, however, is “curious” or “whimsical drawings,” and this was the 19th century understanding of the word when Hokusai’s first volume of drawings, commonly known as Hokusai manga, was published in 1814. 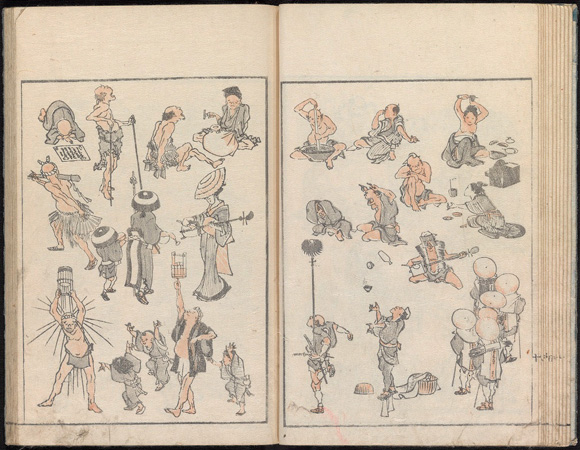 One volume of (Denshin kaishu) Hokusai manga [“(Transmitting the Spirit and Revealing the Form of Things) Random Drawings of Hokusai”] was probably all that was originally planned, but the book exploded on the scene and instantly became the all-time best-selling book in Japan up until that time. It was so popular and widely acclaimed over such a long period of time that 14 additional volumes of Hokusai’s manga were published during the next 64 years. The last three books of the series, however, were created after Hokusai’s death in 1849 at the age of eighty-nine. Two were comprised of unpublished sketches that had been collected by the publisher and the final volume contained a selection of previously published drawings by Hokusai and works by other artists. Many art historians find this last book problematic: a spurious attempt to cash in on the continuing popularity of Hokusai’s artwork in the late 19th century. 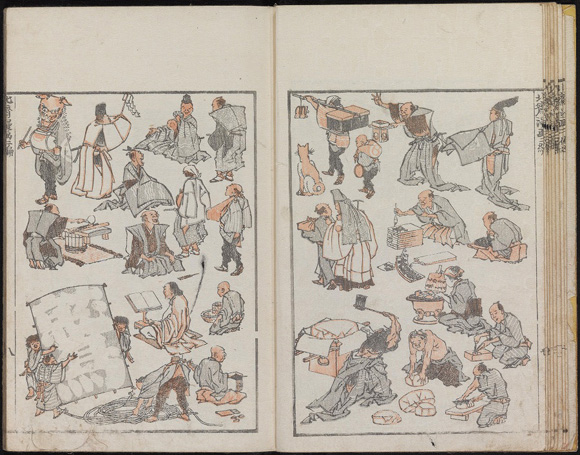 According artist Hanshū Sanjin in his 1812 preface to Volume One, the pictures for the first book were made when Hokusai visited Gekkōtei Bokusen in the Western Provinces and was inspired to make 300 spontaneous drawings illustrating his personal theory of art. It may have been Bokusen (who later became Hokusai’s pupil) who first proposed to legendary publisher Eirakuya Tōshirō the idea of turning the sketches into a book. At the very least we know that Bokusen continued to be involved in its production. He and another of Hokusai’s pupils, Tōnansai Hokuun, are credited as “ko” or “revisers” in the publishing information at the end of the book, suggesting that it was they who arranged Hokusai’s disconnected random sketches to compose page designs that were then carved into woodblocks for printing. 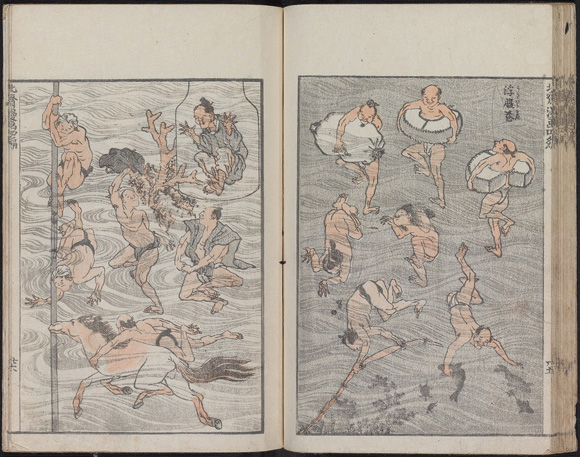 Hokusai himself did not have much regard for this first volume of manga when it was published in 1814. It appears the main reason Eirakuya Tōshirō was even able to convince a reluctant Hokusai to allow him to publish his drawings was that the artist had fallen on hard times. Before 1812 (when the book appears to have been planned) Hokusai had been living off a generous stipend secured for him by his eldest son who had been adopted as heir to the wealthy Nakajima family of mirror makers.* His son, however, had died and this income stream ended for Hokusai. So, whatever Hokusai thought of the project, Eirakuya was ultimately able to convince the artist that a book of his drawings might bring in some much-needed money. Hokusai must have been satisfied with the financial results and critical success, because he continued creating drawings for the series until his death around 1879. 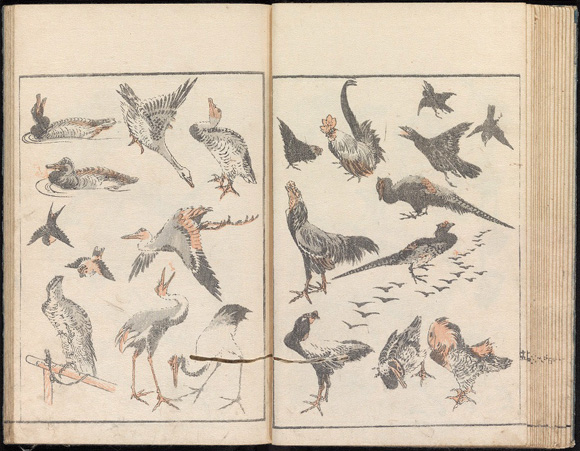 In Hokusai manga we see “images of everything Hokusai had seen or that his mind had conceived” (from the preface to Volume Three). There are “sketches” of people of all kinds performing a variety of activities, animals, birds and bugs, deities and ghosts, sweeping landscapes and detailed views of leaves and flowers. Architecture and everyday objects are also included in this nearly encyclopedic list of themes in the fifteen volume set of manga. Here we show only a smattering of the thousands of images that appear. 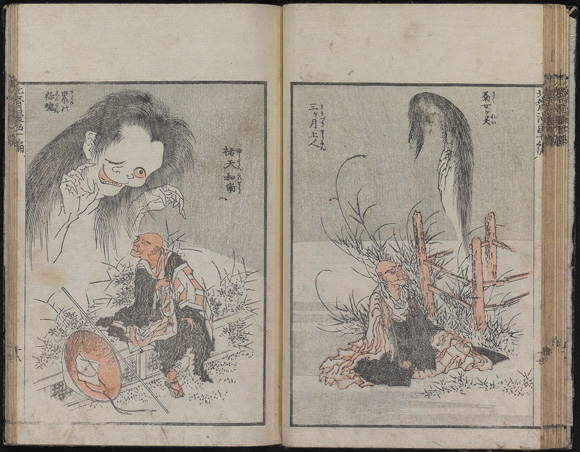 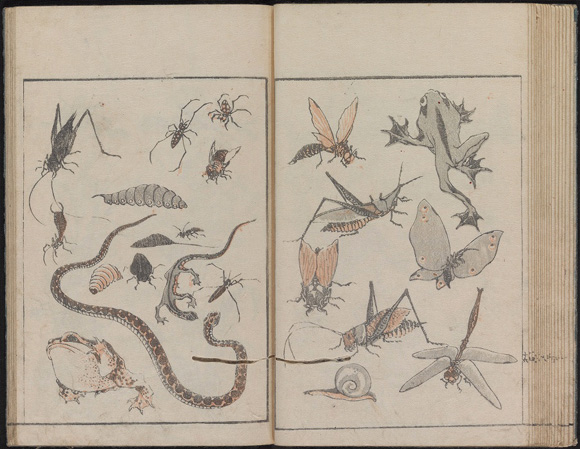 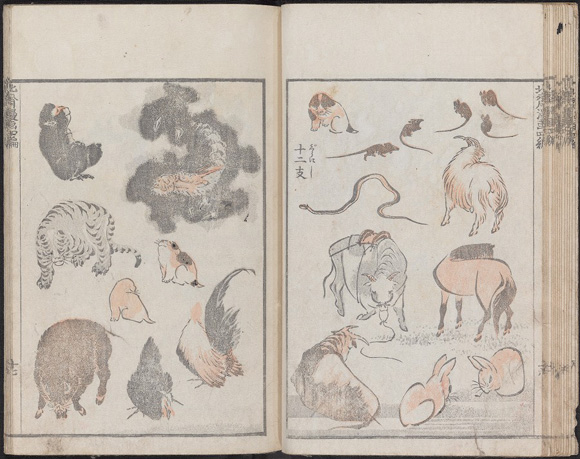 Significantly, though, among the drawings in the earlier volumes, we see Hokusai’s early experiments in portraying Mount Fuji at different angles and in different contexts, years before his most famous print series, “Thirty-six Views of Mount Fuji” was conceived (1826-1833). 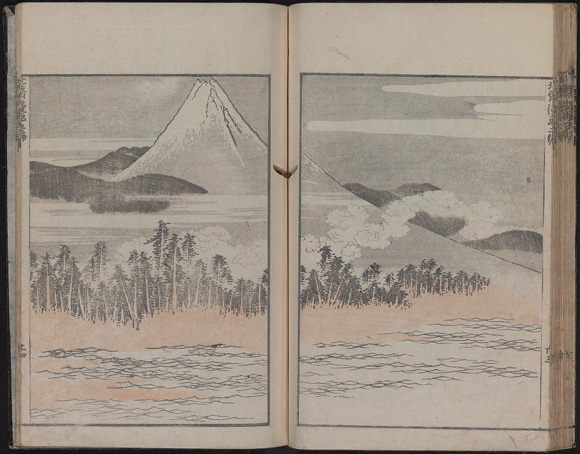 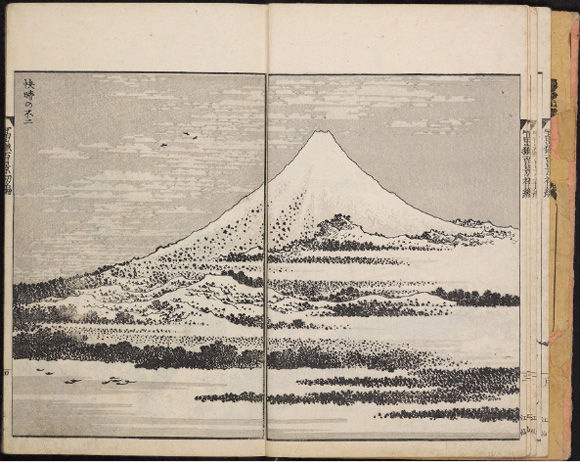 Fugaku hyakkei (“One Hundred Views of Mount Fuji”) (1834) From the collection of Marquand Library of Art and Archaeology, Princeton

Some have suggested that Hokusai manga might have published as a painting manual, because the preface to Volume Four, written by Hōzan Gyo’ō shiki (the sage old angler of Mt. Hō), mentions that Hokusai’s pupils continuously clamored for collections of drawings by the master to uses as models. The book, he continues, could also be used as a guide for the development of students new to art. Such painting manuals were certainly very popular at the time. Hokusai himself had published one two years earlier entitled Quick Lessons in Simplified Drawing (Ryakuga haya oshie), which he hoped would attract new pupils. While the original intent may not have been for Hokusai manga to be a painting manual, it may have become this by the time Volume Four was published around 1816. 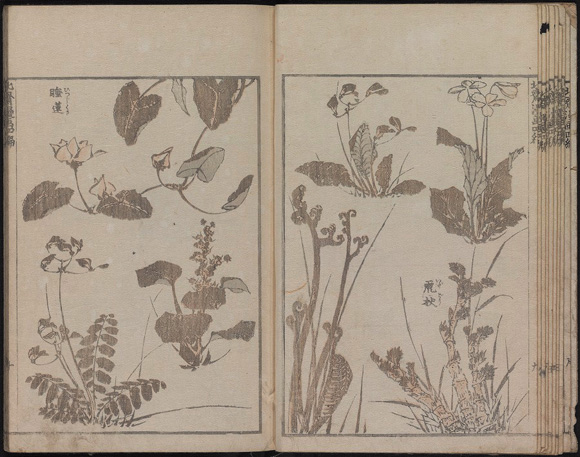 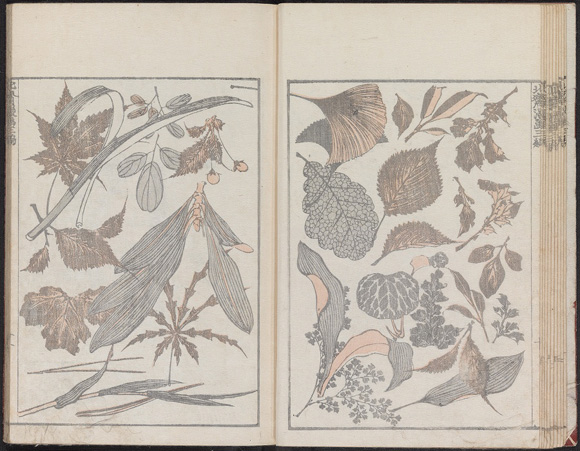 Beyond its popularity in Japan, of Hokusai manga helped to define the image of Japan for the West in the 19th century when in 1831, German physician, Phillip Franz von Siebold quoted many of its images in lithographs for his Nippon: Archiv zur Beschreibung von Japon. 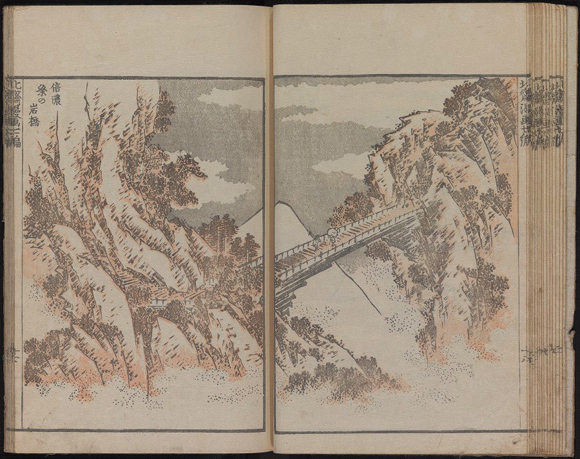 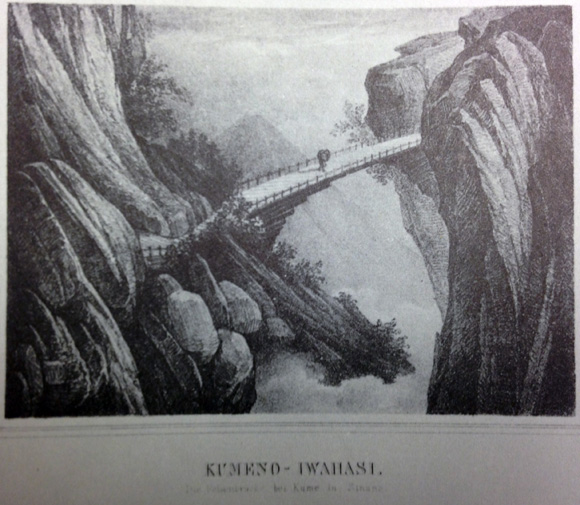 It was also Hokusai manga that around 1854 first introduced artists like Édouard Manet, Felix Bracquemond, and the early Impressionists to Japanese art. There are extant sketches by Manet and Bracquemond that are close copies of its illustrations. Ultimately, Hokusai’s random sketches were not only admired in Japan, but sparked an interest in Japanese woodblock prints that was to have a profound and lasting influence on the Western art tradition. 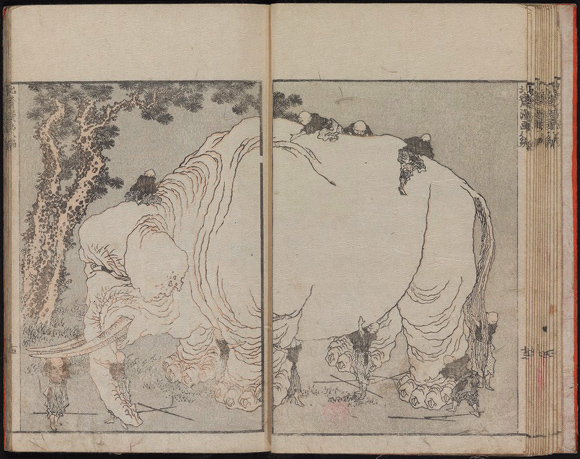 Volume 8: Blind Men and the Elephant

* As a child, Hokusai himself had been adopted into the Nakajima family of artisans, but never made their heir. Some scholars have speculated that Hokusai may have been the son of Nakajima Ise, unrecognized because of his birth to a concubine. The adoption of Hokusai’s son as heir would allow the line to legitimately continue with the family able to save face.