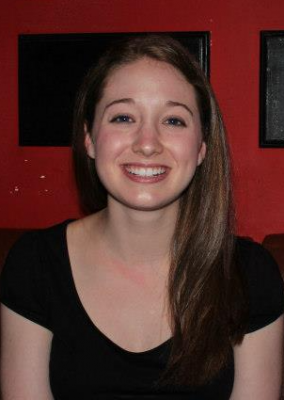 Elisabeth Bloom's encounter with centuries-old materials at PUL shaped her research and learning experience at the University. Photo courtesy of Elisabeth Bloom

Each year more than 200 University classes utilize the Library’s Department of Special Collections (RBSC) resources to provide students with the opportunity to study first-hand historical documents, books and other items seldom encountered. One such class is a seminar in French literature of the Renaissance taught by Professor Katie Chenoweth, "The Matter of the Book: Montaigne’s Essais."

This is the story of Elisabeth Bloom’s encounter with extraordinary centuries-old materials and how it shaped her research and learning experience.

During the seminar, the class met once a month (and sometimes a few times per month) in the RBSC suite. Newly renovated, the reading room provides a temperature-controlled, secure environment for studying items from the collection. In a recent interview, Bloom described how the 16th-century editions were brought into the room and placed on foam cradles. The students were encouraged to explore the pages for details and physical features that distinguished each edition from the other. When asked how it felt to see and touch the actual pages, Bloom said, “It’s a privilege. . . It’s one of the many advantages of studying at a university like Princeton. . . We have this collection of Montaigne which is so rare, and it was so wonderful that we’re taking a class on Montaigne, and then we get to come into the Library and work with not only the books but with specialists like Mr. White.”

Faced with an assignment to present a rare edition or volume on the topic of Montaigne to her class, Elisabeth Bloom wanted something unique, something that spoke to her. Given the option of a number of different volumes, including roughly 10 editions of Montaigne’s essays and a diary of his travels, she was drawn to a small 1598 book titled "Le Proumenoir de M. de Montaigne." It was particularly rare. It was written by a woman, Marie de Gournay — a woman whom Montaigne considered his “adopted daughter.” Bloom explained that women writers in 16th century society struggled to be accepted as intellectuals. She wanted to know more, and she turned to Eric White, Curator of Rare Books, to help her discover what this volume could reveal. 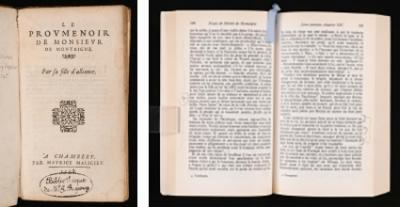 “I don’t really know anything about this, but I thought we have these people that I can talk to and really take advantage of,” Bloom shared. She consulted one-on-one with White, during which time he highlighted the historical meaning of various physical features. The type of paper in the book was used for common books with inexpensive printing. The type of binding was the type that would have been added by the owners. Inconsistent printer's ornaments indicated the edition could be a "cheap imitation." Throughout the discussions, Bloom discovered the edition was indeed a counterfeit with an intriguing backstory, which became a central part of her class presentation.

Not only was her research studying the various editions and volumes instructive about the historical context of printing and publishing of the era, it also took her closer to Montaigne. To study these rare books, she said, “made us feel a lot closer to what the author himself would have been doing and the materials he would have been working with and to see his own hand was. . . amazing.” Hand-written revisions by the author in a book’s margins led her to reflect on the seminar’s theme: a quote by Montaigne, “I am myself the matter of my book.” When asked how seeing his handwriting in the margins impacted her interpretation of the quote, she said, “One way to interpret it is that he is inseparable from the physical constitution of the book: the material, the pages, the ink, the binding.”

One of the Montaigne editions studied during their visits to RBSC was previously owned by Jacques Derrida, the 20th century French philosopher. Although Derrida had made few markings in the margins, Bloom was struck by the connection to history. “Knowing that Derrida himself had held the book was really cool. . . There’s just something really interesting about these books being passed down from one owner to the next. Now we get to hold something that Derrida held.”

While Elisabeth plans to specialize in 19th- and 20th-century French literature and music, she is thrilled to have explored 16th-century literature and especially to have discovered the Pierre Le Brun collection of Montaigne.