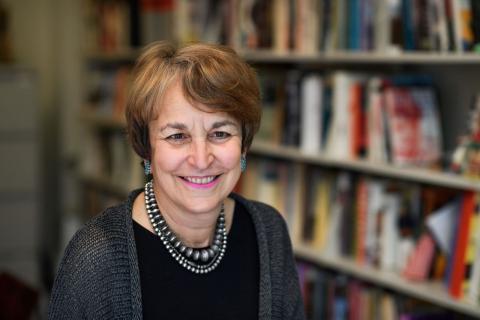 In 2012, Princeton University History Professor Martha (Marni) A. Sandweiss approached University Archivist Dan Linke about conducting an undergraduate research seminar at the Library in the spring of 2013, using University Archives to investigate the connection between Princeton and the institution of slavery. Over the past several years, the small, informal inquiry has grown into an extensive undertaking named the Princeton & Slavery Project.

“My hope was that by asking new questions, students could find new stories in the Archives,” Sandweiss said. “And that’s just what happened. It’s been a joy to introduce students to archival research, and extraordinary to see what they’ve been able to uncover.”

The Princeton & Slavery seminar classes met in the Seeley G. Mudd Manuscript Library, where University Archives are preserved. Working closely with Linke and his staff, students explored how University records could answer new questions on the subject. The Archives provided access to primary source materials such as board of trustee and faculty minutes, presidents’ records, and alumni biographical files. 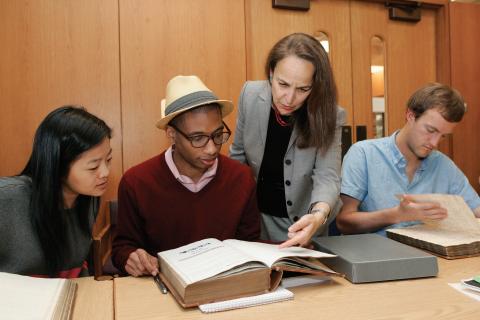 Archival documents used for research included papers belonging to John Maclean Jr. (the tenth president of Princeton University). Within the papers, which Linke purchased in 2008, an estate inventory for John Maclean Sr. (the University’s first chemistry professor) was found. Two startling listings read: a young slave girl valued at $175 and a slave boy, $75. This was among the first pieces of evidence discovered that indicated Princeton faculty owned human beings, opening up an avenue of inquiry that led to the discovery that many faculty possessed slaves, one as late as the 1840s.

In addition to invaluable firsthand original sources such as the Maclean inventory, students also utilized the Library’s extensive databases and digitized collections in their research. By searching through antebellum New Jersey newspapers, Professor Sandweiss and her students found dozens of advertisements for slave sales in Princeton, including one sale conducted in 1766 on the front lawn of the President’s house. Collectively, these ads revealed that slavery persisted in Princeton even after New Jersey passed a gradual emancipation act in 1804. 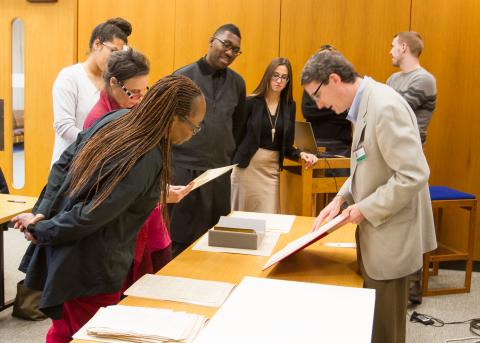 With funding support from the Princeton University Humanities Council, the Friends of the Princeton University Library, and others, the Project grew in scope to include community collaborations and a major symposium. The Princeton & Slavery Symposium will be held on November 17-18, 2017, with Nobel laureate Toni Morrison delivering the keynote address. In addition to panel discussions and other activities, Symposium events include McCarter Theatre’s world premiere of “The Princeton & Slavery Plays,” seven newly-commissioned short plays based on historical documents uncovered as part of the research project. 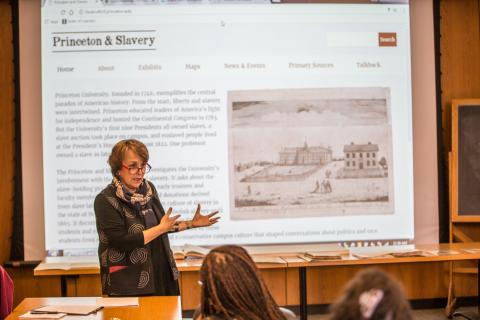 “The Princeton & Slavery Project is just the type of collaborative scholarly research project that epitomizes what can be accomplished when partnerships develop between faculty, librarians, and the community,” said Anne Jarvis, the Robert H. Taylor 1930 University Librarian. “We are privileged to have the opportunity to work with such passionate scholars as Marni Sandweiss.”

Explore the findings of the Princeton & Slavery Project at slavery.princeton.edu (hosted and maintained by Princeton University Library).

The Princeton & Slavery Library Exhibit (October 17 to December 15, 2017): Visit the Princeton Public Library to view reproductions of historical documents from University Archives and the Historical Society of Princeton used for research on the Princeton & Slavery Project. Detailed descriptions reveal how deeply ingrained the practice of slavery was throughout the community well in the 19th century. Materials on display include the story of James C. Johnson, a fugitive slave freed after an 1843 trial in Princeton. Johnson is buried in the Princeton Cemetery; his gravestone includes the epitaph: “the students’ friend.”

The University Archives houses over 300 collections documenting the history of Princeton University from its founding to the present. To learn more about its collections, please visit: rbsc.princeton.edu/mudd.