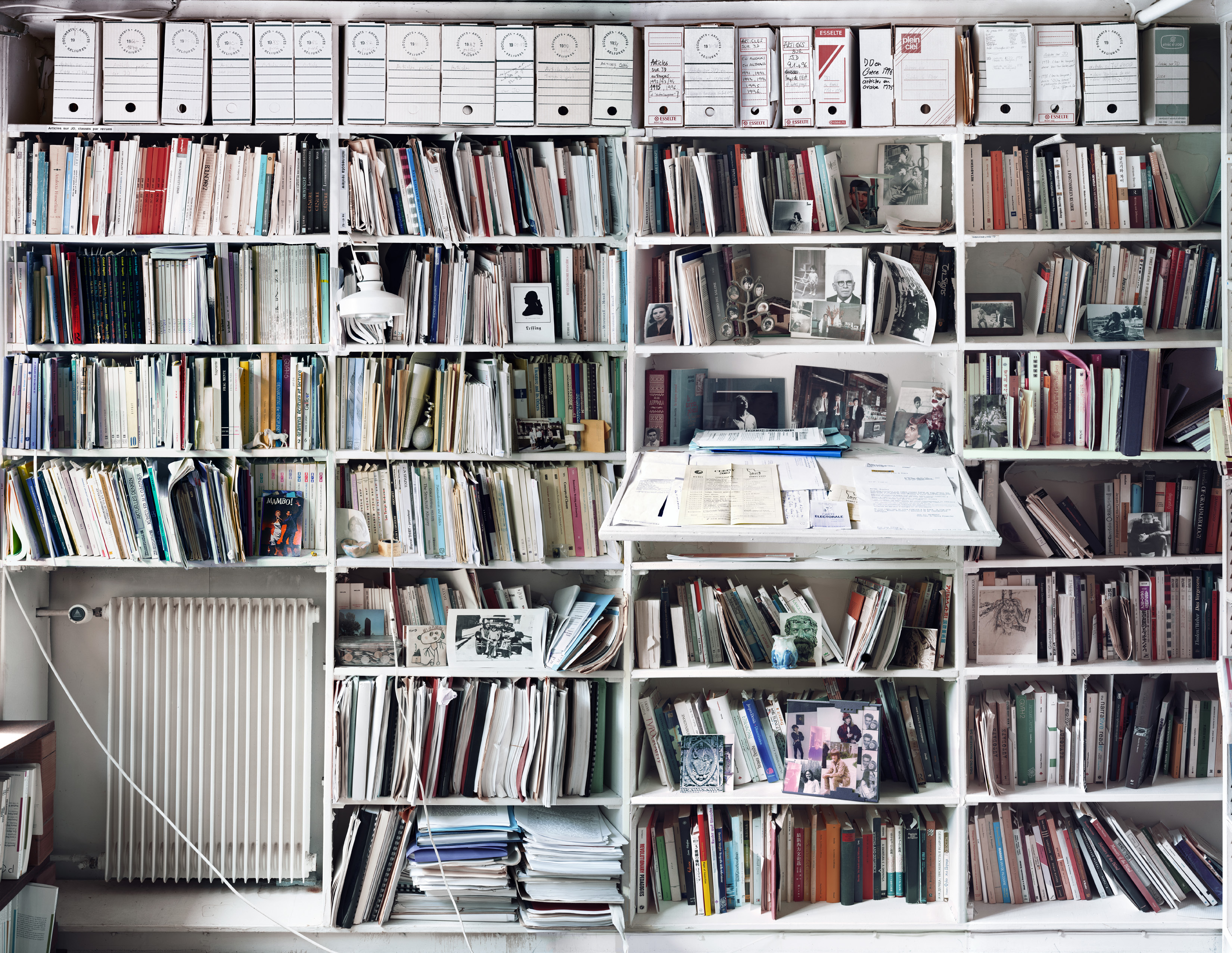 A view of part of Jacques Derrida's library in his home in Ris Orangis. Used with permission. © Andrew Bush, 2001

The Princeton University Library is very pleased to announce the acquisition of the personal working library of Jacques Derrida.

Jacques Derrida (1930-2004) was an Algerian-born French Jewish philosopher who is considered one of the most influential thinkers, writers and critics in the fields of literary criticism, philosophy, art and architecture, linguistics and political theory among others. He is most widely known for "deconstruction"—a strategy for apprehending texts and political institutions.

Derrida's library, consisting of about 13,800 published books and other materials, represents a lifetime of reading. But for Derrida, the act of reading was not a passive process: he engaged—even grappled—with what he read, covering pages with notes and cross-references, inserting other handwritten materials, quoting and adapting what he read into what he wrote. As Derrida himself said in an interview later in his life, his books bear "traces of the violence of pencil strokes, exclamation points, arrows, and underlining." 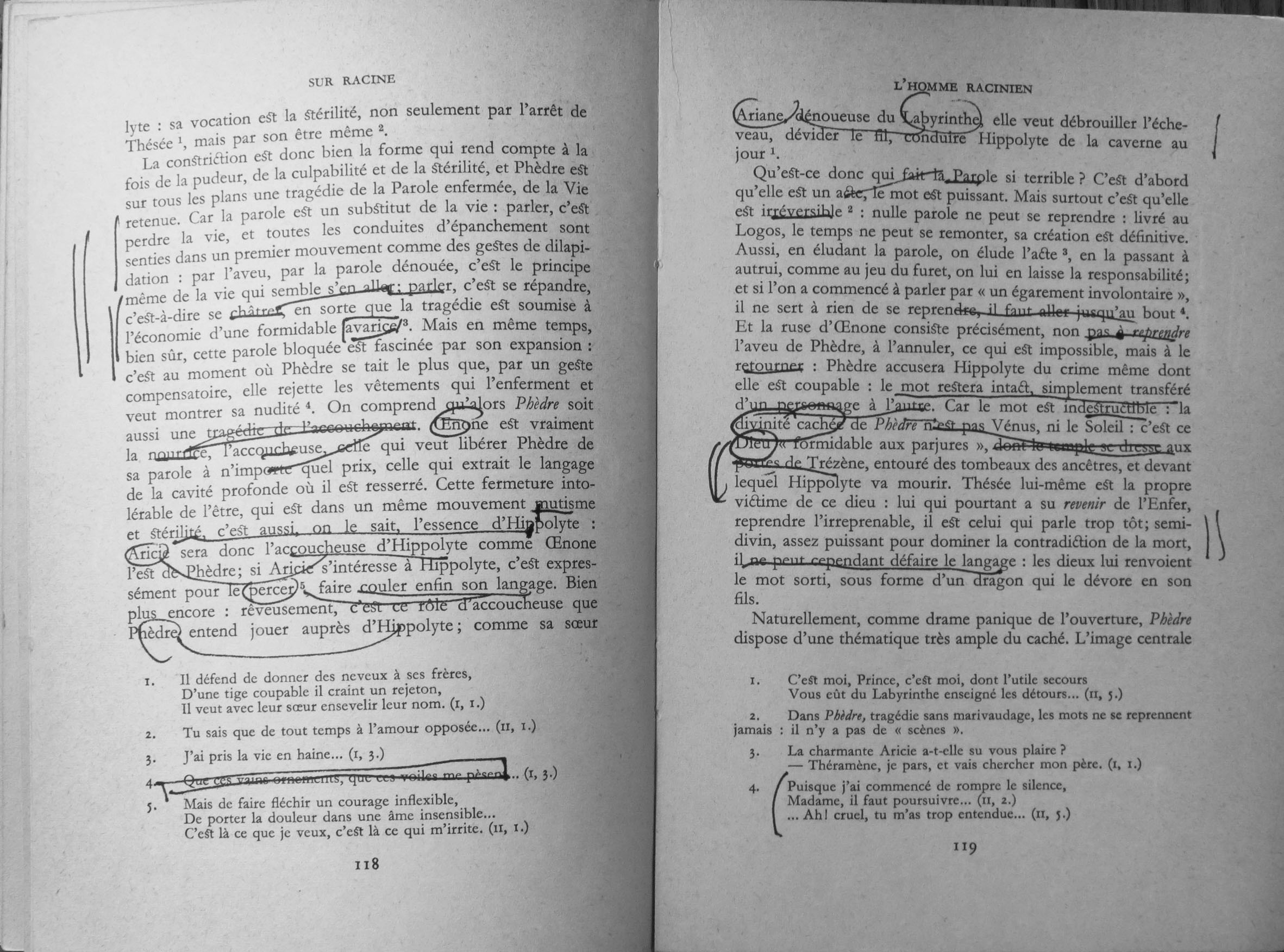 Anthony Grafton (Henry Putnam University Professor of History, Princeton University) explains that the great libraries of original and influential scholars "show us those writers at their desks, responding to other minds. Reading marginal notes, we stand at the scholar's shoulder and listen in on the discussion between scholar and author, as it takes place. It is wonderful—in an ironic way that would have appealed to no one more than Jacques Derrida—that scholars and students will be able to reconstruct his part in this great humanistic tradition in Firestone Library."

Gayatri Chakravorty Spivak (University Professor, Columbia University) considers this collection "an inestimable treasure; working materials from the most important philosopher of reading of our times."

Hal Foster (Townsend Martin, Class of 1917, Professor of Art and Archaeology, and Co-Director, Program in Media and Modernity, Princeton University) says that "Derrida developed his own thought through a meticulous engagement with other thinkers, past and present, thinkers who at once constitute the Western traditions of philosophy and literature and defy them (indeed they constitute them in part because they defied them). What a boon it is for us at Princeton to have his notes on these thinkers and writers, to see the master of textuality perform, as it were, on other master texts."

After more than a year of discussions and complex arrangements co-ordinated by the Collection Development Department, and an examination of the collection in Paris by an expert team from Princeton, the Princeton University Library took physical delivery of Derrida's library on Thursday March 19, 2015. The unpacking, sorting, describing, organizing, preserving, and housing of the books and other materials in this collection will proceed as quickly as possible. As they are processed, these materials will be made available to scholars through the Department of Special Collections in Firestone Library.

"It is so exciting to be able to bring the entire reading world of Jacques Derrida to Princeton, to make these works which were so central to the development of his thinking accessible for new explorations in the archaeology of reading, digital humanities, and other research and pedagogical endeavors of scholars and students," says David Magier (Associate University Librarian for Collection Development).

"The acquisition of Jacques Derrida's personal library… makes available to scholars worldwide for the first time the foundational materials of deconstruction—Derrida's reading materials—and the 'traces' of his singular encounter with them," says Katie Chenoweth (Assistant Professor of French and Italian, Princeton University).

"How satisfying that [Derrida's] library should come to Princeton… The presence of these books in Princeton not only enriches the archive, it suggests something of the intense, ongoing life an archive may have," Michael Wood (Charles Barnwell Straut Class of 1923 Professor of English and Comparative Literature, Emeritus, Princeton University).