In the words of its author and illustrator, Utagawa Toyokuni, ‘Ehon imayō sugata is a book about women of all kinds: from women of noble birth to those of the lowest classes—from the most virtuous women to the most immoral.’ Specifically, these are Toyokuni’s depictions of the modern women of early 19th century Edo (present-day Tokyo) presented in scenes from their daily lives. The book is considered one of the artist’s most important works, designed and published at the height of his career in 1802.

Founded by Toyokuni’s teacher, Toyoharu (1735-1814), the Utagawa School was one of the premiere woodblock print schools of the 19th century. As its second leader, Toyokuni helped to shape the school’s distinctive style, a style which set the standard for images of women and kabuki actors in Japanese art of the period. The women of Ehon imayō sugata define this standard. Toyokuni was also teacher to some of the most famous artists of the Utagawa School, including Utagawa Kuniyoshi and Utagawa Kunisada.

In the preface of the first of two volumes, Toyokuni takes credit for both the illustrations and text of Ehon imayō sugata, but the latter was more likely the work of the book’s so-called ‘editor,’ Shikitei Sanba. By 1802 this renowned author of humorous fiction had already collaborated with Toyokuni on two successful kabuki theatre books that combined his comic poetry (kyōka) with the artist’s portraits of actors. Sanba’s importance to the project is underscored by the deeply embossed pattern on the covers, which features his seal (Shikitai) alternating with the toshidama (“new year’s jewel”) shaped seal of the Utagawa School.

Overall, this ‘Picture Book of Modern Forms and Figures’ is organized on a sliding scale of the perceived morality of the women depicted. The more “virtuous ladies” are portrayed in volume one and are physically separated from the “less virtuous courtesans” of the Yoshiwara Pleasure Quarters who inhabit volume two. 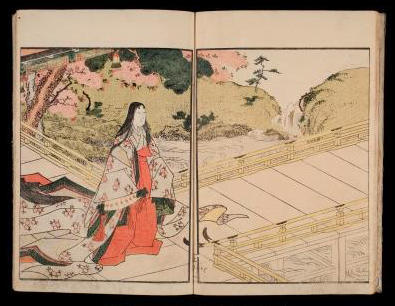 In the opening scene of the first volume, a woman of the nobility in silk robes strolls through a garden with flowering cherry trees beside a stream

The twelve double-page illustrations of volume one begin with a lady of the nobility in a lovely garden setting (above). It continues with pictures of women of the samurai class in refined settings. They read and write and eat delicious food (below).

Scenes featuring women of merchant/artisan class (also known as “townsmen” (chōnin)) follow. Although, they had less status than women of the samurai class in a society rigidly structured by the Tokugawa government, they had much greater wealth. Had Toyokuni adhered to the hierarchy established by the government, however, these ladies would have come after the farmwomen at the end of volume one. Their placement here may not only reflect contemporary perceptions of morality, but, perhaps, the reality that townsmen made up a large percentage of the book-buying public and would not have appreciated a less lofty positioning. 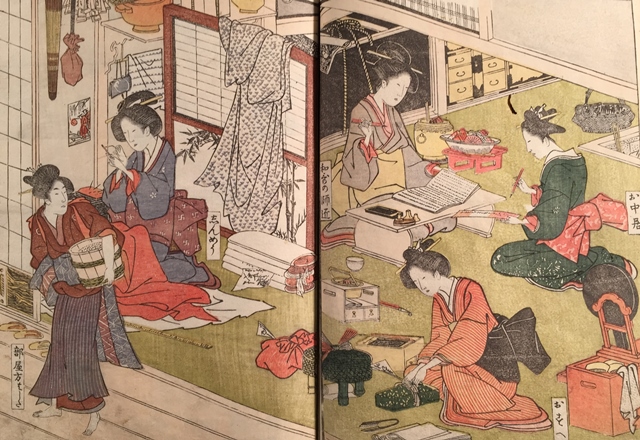 “Working women,” including a laundress, an archery-range attendant, and a woman selling cosmetics, is the next group to appear in this volume. It then concludes with a scene of farmwomen resting in the fields on the outskirts of the capital city. 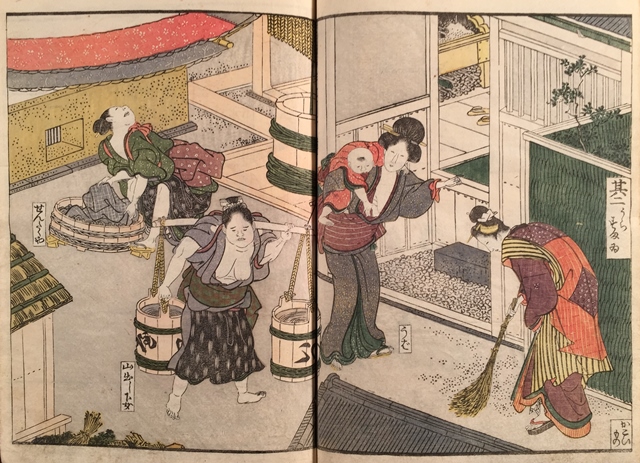 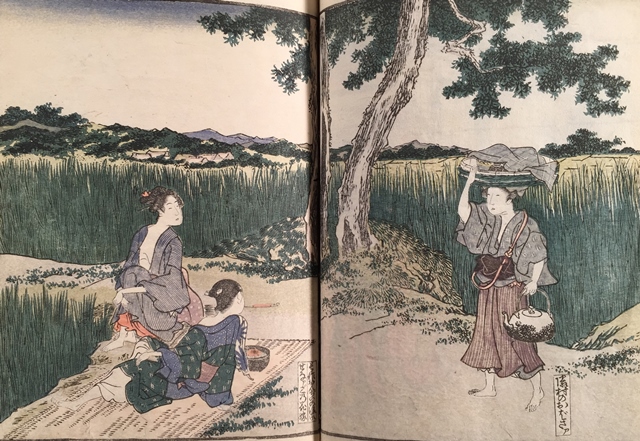 Farmwomen taking a break in the fields

Volume two of Ehon imayō sugata features the women of Yoshiwara, Edo’s licensed prostitution district or “pleasure quarters.” Here too, we find the women ranked from the most elite class of courtesan of the period (oiran), who is dressed in all her finery, to the streetwalkers of the district, with their ugly, lined faces and twisted bodies. In the final scene, Toyokuni depicts the lowest class of woman: an unlicensed riverboat prostitute on the Sumida River. Quite different in mood from the scene of “nighthawk” prostitutes (yotaka) that precedes it, this is a rather poignant image of a woman, standing alone in her boat, gazing at the moon. 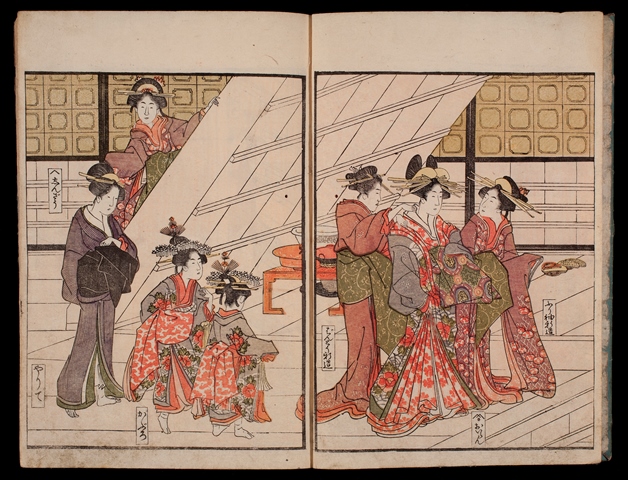 An elite courtesan of Yoshiwara with her retinue 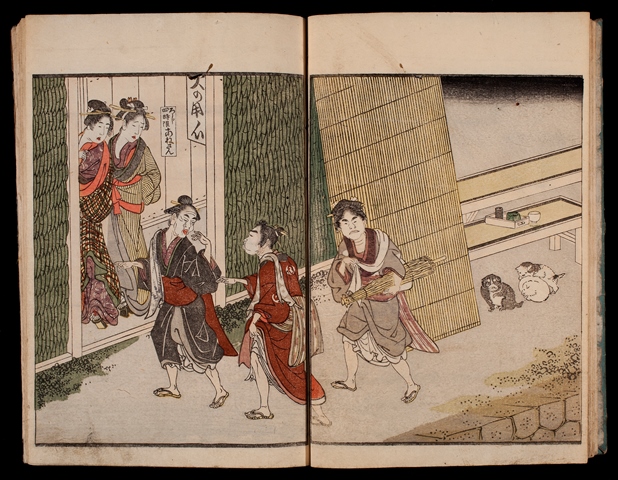 Old ‘nighthawk’ prostitutes’ (yotaka) on the streets of .the Yoshiwara Pleasure Quarters of Edo 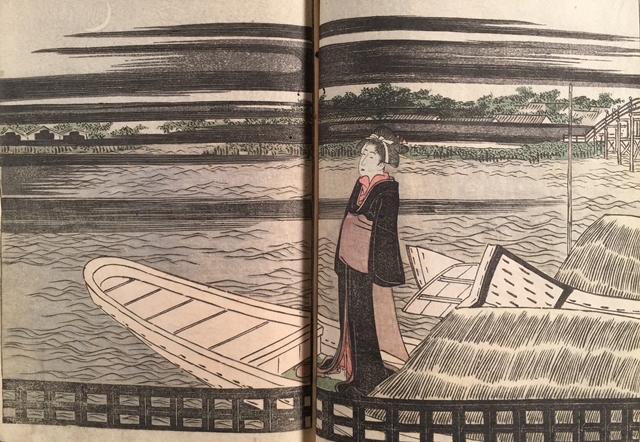 Within most of the double-page illustrations of Ehon imayō sugata, there are cartouches that can either identify the women or offer explanatory information about the scene:

The many editions and printings of this book suggest that Ehon imayō sugata was extremely popular, despite the fact that its publication flaunted a 1797 government edict banning images of women of different classes appearing together in books and woodblock print series. It is suspected that it must have run afoul of government officials, because in subsequent printings and later editions, the explanatory information has been removed—cut from the printing blocks—leaving blank cartouches within the illustrations (see British Museum version below). It is very rare to find a copy of the first printing of any book that defied such laws. Many were destroyed even before distribution. The copy in Marquand Library, with the explanatory cartouches intact, is therefore an extremely rare example of Ehon imayō sugata. 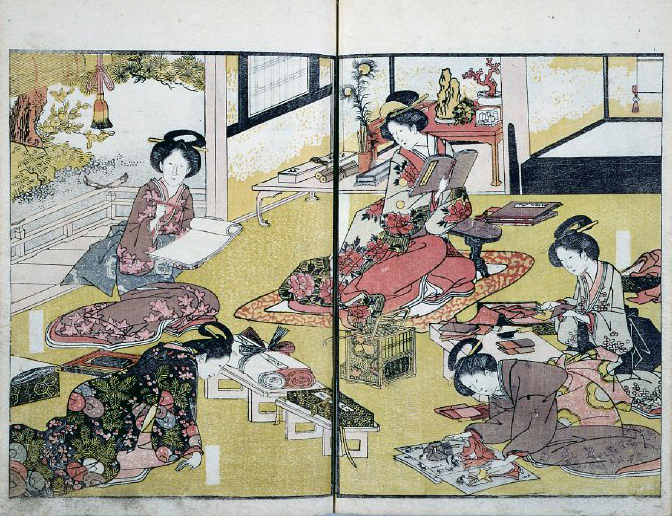 Scene of the samurai class women from the British Museum copy of Ehon imayō sugata (1979,0305,0.194.1). Note that in this slightly later printing, the writing in the cartouches has been removed to avoid government censure

Marquand Library’s copy of Ehon imayō sugata has a very distinguished provenance. It was owned by Edmond de Goncourt, one of the first Europeans to popularize Japanese art in the mid-19th century in the West, and the first to publish a monograph on it (Outamaro: Le Peintre des Maisons Verte (Paris): Charpentier, 1891). In his handwritten note, pasted into the back cover of Volume 1, Goncourt notes information about the subject matter of each volume, records the artist’s name and date of publication, and notes the fine quality of the print impressions before signing his name. 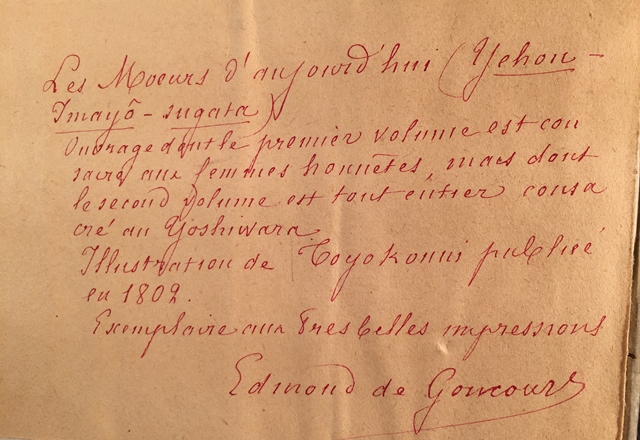 Note signed by Edmond de Goncourt, found in the back of Marquand’s copy of the book

Marquand’s copy of Ehon imayō sugata was probably in Goncourt’s collection by 1891 when he refers to it in the above mentioned book on the work of the artist Kitagawa Utamaro (Outamaro). Unfortunately, the Toyokuni book does not fare well in comparison with Utamaro’s 1809 version of this theme, a book with which Goncourt can find no flaw. 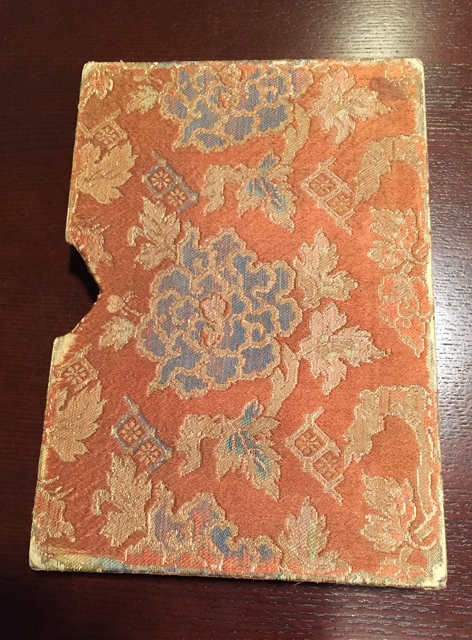 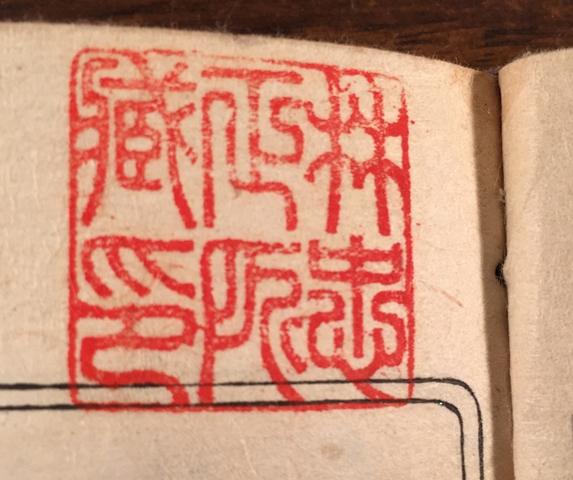 Seal of Hayashi Tadamasa on opening page of first volume.

Goncourt, however, was not the only historically significant figure to own the Marquand copy of Ehon imayō sugata. We can trace the provenance of our copy back to Parisian Japanese art dealer Hayashi Tadamasa, whose large red seal appears on the first page of the preface. Hayashi had come to Paris in 1878 when he served as Japanese official at the Paris World Exposition. When the exposition was over, he stayed on in the city to open a shop. As a dealer, Hayashi was instrumental in bringing Japanese art to the West and popularizing it across Europe. Recent scholarship suggests that he introduced more than 10,000 Japanese woodblock-printed books and 160,000 individual prints to a receptive European audience. Many of these are the images that inspired the Impressionists. Seventeen of the prints in the painter Monet’s personal collection, for example, have the Hayashi Tadamasa seal (above) impressed on them. Hayashi is also known to have sent Japanese irises to the artist for his now famous garden at Giverny, which may indicate that their relationship was personal as well as professional.

We do know that Hayashi was a good friend of Goncourt’s and he is known to have personally helped to shape his vast collection of Japanese art objects, paintings, woodblock prints and books. The collection, however, was dispersed in 1897, a year after Goncourt’s death, at an auction at the Hotel Drouet in Paris.

This pristine copy of Ehon imayō sugata in its original form with the explanatory cartouches, is a valuable addition to the Marquand Library collection of 19th century books. In recent years, though, the “History of Collection” as a field of scholarly pursuit has become an important part of understanding the cultural importance of an object over time. For that reason, the acquisition of this particular copy of the book has added significance. Brought to Paris by a dealer who was influential in shaping the appreciation of Japanese art in Europe, it became part of one of the greatest early collections of Asian art in the West.