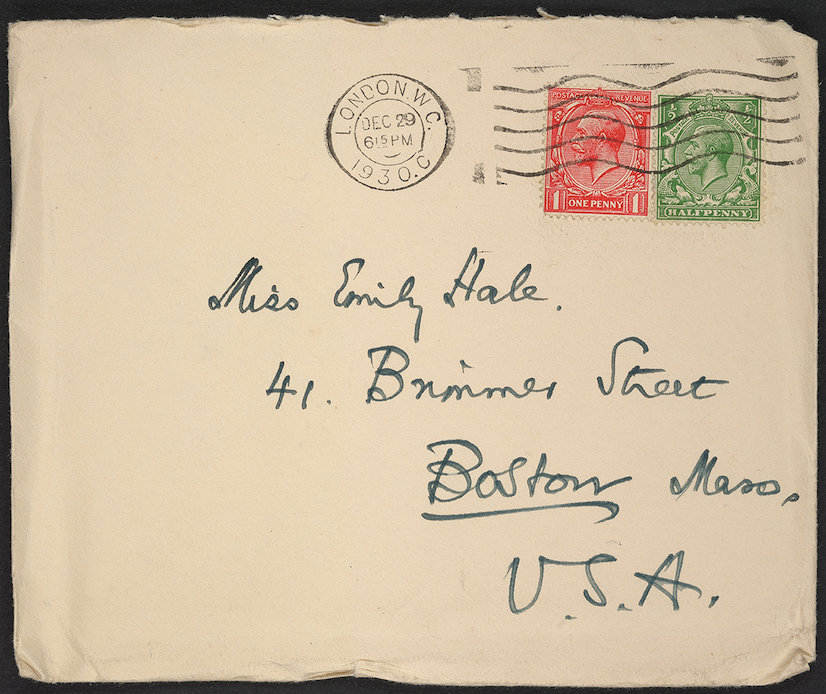 One year ago, on Jan. 2, 2020, over 1,100 letters from Nobel laureate and renowned writer T.S. Eliot to his longtime friend Emily Hale became publicly available through Princeton University Library (PUL). Hale donated the letters to PUL in 1956, with the stipulation that they remain sealed until 50 years after the death of Eliot or Hale, whoever lived longer.

Daniel Linke, University Archivist and Deputy Head of Special Collections, shares what scholars have learned over the past year from this highly anticipated correspondence.

Prior to the release of these letters, Hale had been described as Eliot’s muse and confidant. Who was Emily Hale? What have these letters revealed about her relationship with Eliot?

Emily Hale was an American speech and drama teacher who worked at Simmons, Scripps, and Smith colleges. There was speculation over the exact nature of the relationship between Emily Hale and T.S. Eliot, but the letters revealed an intensely emotional, if chaste, relationship between the two for nearly two decades. He notes the places they visited together, his feelings for her, and how they inspired his work. Sadly, Eliot burned her letters to him, so we will never know her part of this correspondence.

What do the letters tell us about Eliot?

I attended (virtually) the annual T.S. Eliot Conference in October in which there were two panels of four scholars each detailing what they found in the Hale letters. There I learned that Hale greatly influenced much of Eliot’s mid- and late-career work, especially "Four Quartets" and "The Family Reunion," with the letters revealing Eliot’s real-world analogs to those in his poetry. The panelists agreed that the letters document the intimacy between Hale and Eliot, as she was the only person, other than Eliot himself, who understood the connection between his poetry and his life.

Other panelists noted the letters gave insight into Eliot's thinking on celibacy, his perspective on Jewish people and Judaism, and that as a whole, the letters add a great deal of nuance that will open the door to a wide range of new questions for Eliot studies.

Upon learning of Hale’s donation of his letters to Princeton, T.S. Eliot drafted his own review of his relationship with Hale, donated to Harvard’s Houghton Library, which became publicly available after the Hale letters were unsealed. What was revealed by his account?

One of the Eliot scholars told me that she thought he wrote the letter for Valerie’s sake, his second wife, thinking the letters would be released or leaked before the 50-year restriction lapsed. (They weren’t.) In it, he denies that he ever really loved Hale, but to me, with over 1,100 letters arguing against that, it seems as if he “protesteth too much.” He says that marrying Hale would have "killed the poet in me," but he never published any new poetry after marrying his second wife, and in the letters he declares that Hale is his inspiration for some of his work, so that doesn’t add up. At the behest of the Eliot scholars and because there was no copyright question with Hale’s narrative, we put hers online too, so people can read her thoughtful and heartrending account of their relationship.

How did the opening of the letters go? Were there any surprises?

There was quite a buzz on Jan. 2, but I am pleased to say we handled all the researchers fairly and efficiently, thanks to Special Collections public services staff headed by Sara Logue. We had prepared by having three digital sets ready, contained in 14 boxes, and one duplicate set, which went practically untouched as it turned out. I thought people would want to see the original letters, but most preferred working with the digital set, since you could review the entire collection at one time that way, as opposed to one box at a time with the originals.

It was also great to see the cooperative nature of the Eliot scholars. They either knew each other or came to know each other and worked very collegially, both in terms of working out who would get which boxes when, as well as sharing their findings with each other, especially when they knew something they found would be helpful to someone else’s research.

How can scholars access these letters? When will they be made available online?

The Eliot letters are under copyright until 2035 and not currently available online. However, the Eliot estate plans to publish the letters online in spring 2022, complete with footnotes as in a print edition.