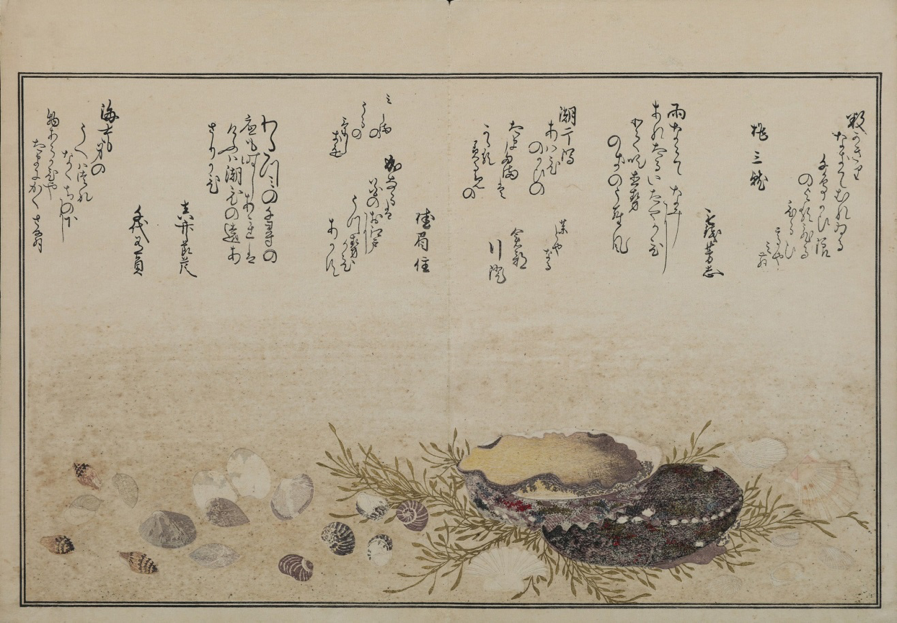 Described as "one of the most beautiful books ever published," (1) Gifts from the Ebb Tide by the renowned artist Kitagawa Utamaro is the latest addition to Marquand Library of Art and Archaeology's collection of rare Japanese books. The single volume, published in 1789 by the celebrated publisher, Tsutaya Juzaburō, is a masterpiece of design and execution. It is not only one of Utamaro's early masterworks but an important physical object in the history of the Japanese book. Our pristine first edition copy, for example, incorporates the most luxurious forms of all of the significant techniques and processes available to the publishing industry at the time time: it has rich, full-color illustrations that are embellished with sprinkled mica and mother-of-pearl, motif that are enhanced with gold paint, brass filings, and pipette-blown pigment. The images are brought to life with three-dimensional textures created by embossing (gauffrage) that transmute the images with changes in lighting. The covers are hand-painted in gold on deep indigo paper. 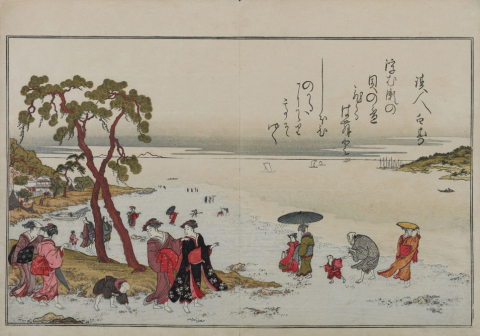 In the first illustration, men, women, and children search for shells on the beach at Shinagawa. The poem above suggests this is a search for a shell like the famous one used as a sake cup at the Welling Tide Inn in Osaka. It was at this inn that illustrious poets of the past, like Matsuo Bashō & Yosa Buson, wrote haiku poetry. The poem is signed "author unknown" and was probably the work of a high-ranking samurai, who did not want his identity to be known.

Gifts from the Ebb Tide purports to memorialize a day at the seashore. In his preface to the book, the renowned poet Akera Kankō (1740-1800) tells us that, on a beautiful day in the spring of 1789, he and six companions from the Yaegaki Poetry Circle set out on a boat across Shinagawa Bay to spend time gathering seaweed and seashells on Sodegaura beach. He continues that (after encouraging one another to drink heavily throughout the day) he and other poets were beckoned to travel to the Palace of the Dragon King at the bottom of the bay where they gathered shells of all varieties. Inspired by these 'gifts of the sea,' they "followed the precedent of the poetic immortals who wrote about shells" and each of them "composed a poem as a souvenir of their [sic] excursion from the Bay of Shinagawa." (2) A postscript to the book, believed to be written by the poet, Kurabe no Yukizumi (act. 1786-1788), embellishes the story a bit with his recollection of the events (also noting that large amounts of alcohol consumed) and the group's plan to have a book of the poetry from this excursion published.

Books at the end of the 18th-century were largely conceived by publishers, who kept their fingers on the pulse of current trends in the marketplace. It was common practice for these publishers to invent pretexts for the creation of books they thought would capture the imagination of prospective readers. Consequently, the idea of this poets' day at the beach was probably invented by Tsutaya Jūzaburō, who must have believed that a book with detailed illustrations of shells on a glittering beach--framed with prints of beautiful women on the first and last pages--would be popular with the book-buying public. (3) Having conceived the idea, he would then have hired Kankō and the other accomplished poets to write witty/humorous poetry (kyōka) on the theme of shells and Utamaro to do the illustrations. Jūzaburō, one of the most distinguished publishers of the era, was known for his inventive ideas, his luxuriously produced books, and his "stable" of highly admired authors and artists--including the young Kitagawa Utamaro. 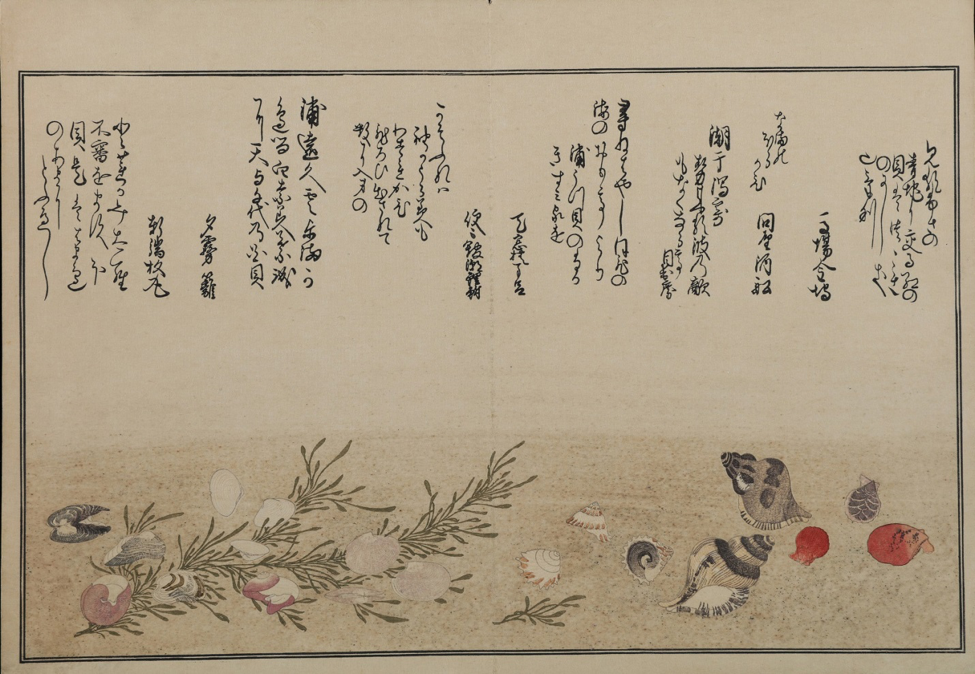 As you can see here, Gifts from the Ebb Tide is a luxurious production. The illustrations on thick hōsho paper are large, with each composition spanning two pages. Unfortunately, because these are beautiful large-format images, the book was often dismantled by dealers to sell the prints individually for a higher profit. It is therefore a very rare title, and the Marquand copy is one of the only first-printings still extant. In later editions, the colors are less subtle; there has been some re-carving of the woodblocks, and a purple wavy line has been added in the background to suggest a water line.

The book is introduced with an opening illustration of the shore at Shinagawa Bay. It is filled with people looking for shells on a beach with sand that glitters with a dusting of crushed mica and mother of pearl. The intricately embossed waves that lap the shoreline appear to undulate as the book is tilted to catch the light. In the pages that follow, viewers are transported from this panoramic view of the beach to the sandy surface itself, where Utamaro has created six inventive compositions of the life-like shells and sea bracken lying there. Each of these individual motifs has been paired with a witty poem (kyōka) that, with its allusions to classical literary themes, historical tropes, and/or aspects of traditional Japanese culture, would cleverly help the reader to identify the undersea flora or fauna. In the illustration above, for example, the poet Umaba no Kinrachi riffs on the "brocade shells" (nishiki-kai) on the right and to the seaweed on the left side of the page by referencing a poem from the 10th-century Kokin wakashū ("Anthology of Japanese Poems Ancient and Modern," dated 905), which describes a 'brocade of willow and cherry branches:'

Tassels of seaweed
woven into a green fabric and
adorned with crimson shells
resemble tattered rags
sewn into a colorful brocade. (4) 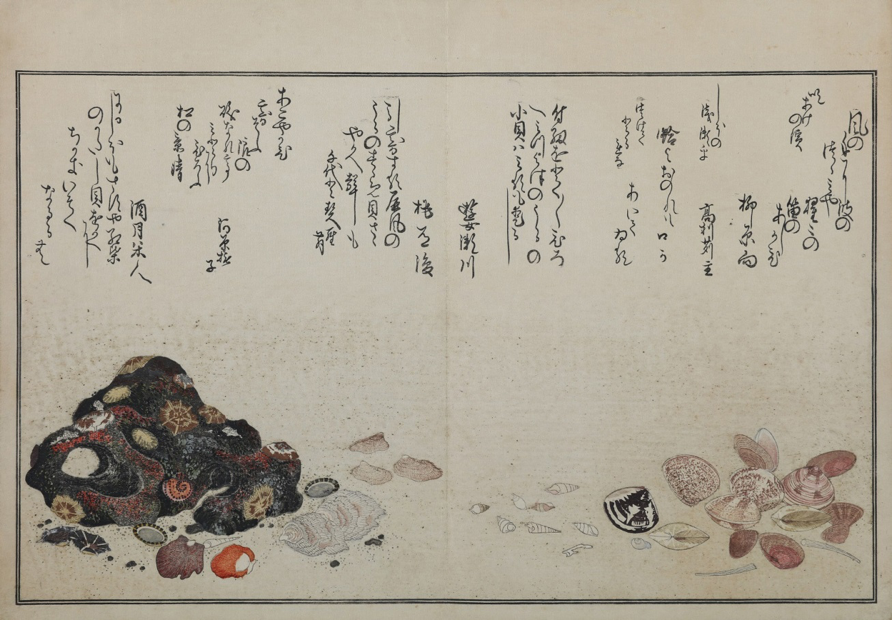 Six poems appear on each of the six pages of shell designs for a total of 36--the number we are told were produced by the Yaegaki Poetry Circle that spring day in 1789 in the postscript. This, it relates was an homage to the Thirty-Six Immortal Poets (5), which had been a traditional theme in painting, prints, and books for centuries. The poems here reference everything from Chinese classics to Noh Theatre to brothels and (in the case of a poem in the image above): a slab of tofu. 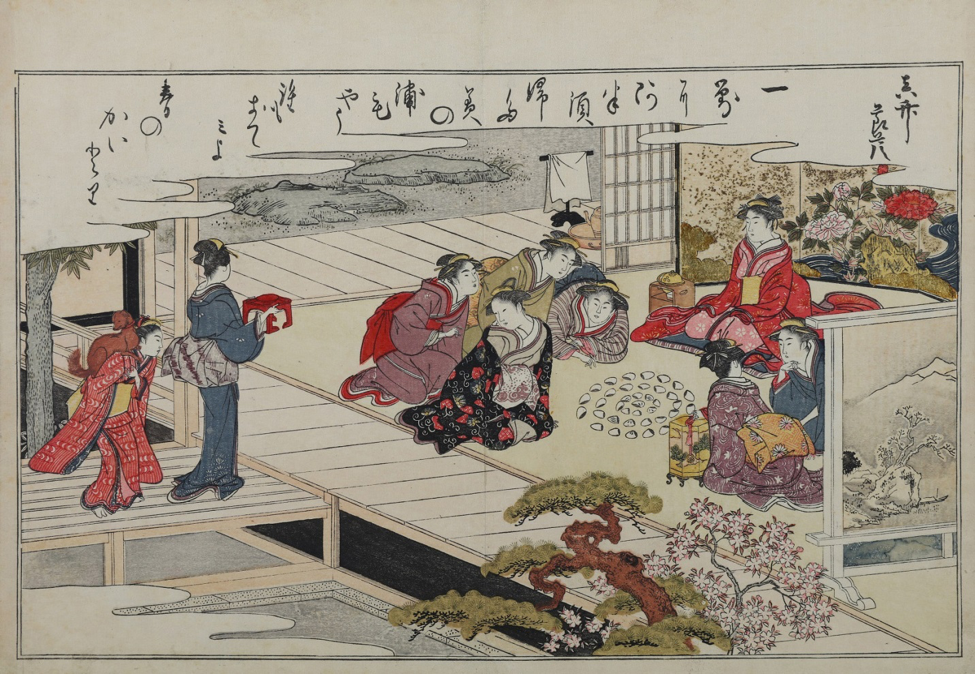 Gifts from the Ebb Tide is symmetrically concluded with a return to the human realm, where the shells discovered on the beach in the first illustration have now been brought home. The final scene of the book is an interior view of beautiful women playing a traditional Japanese shell-matching game (kai-awase) (6). First documented in the Heian Period (794-1185) and so popular that the matching shells were commonly a component in the 17th- through 19th-century bridal trousseau, this popular game was often elaborately produced and housed in exquisite hexagonal lacquer boxes like the one we see here beside the women wearing the patterned purple kimono.

Gifts from the Ebb Tide was one of three books designed by Utamaro and published by Jūzaburō between 1788 and 1790 that focused on the natural world. Several years ago, Marquand purchased the first book of this group, affectionately known by scholars as "The Bug Book" (Ehon mushi erami or "Picture Book: Selected Insects"), published a year earlier. [See my blog entry on Marquand's 1788 and 1892 copies of "The Bug Book" here.] The third book, Myriad Birds (Momo chidori) was published in 1790. At the back of "The Bug Book," there are advertisements for future volumes on bird, fish, and animals. Scholars speculate that Gifts from the Ebb Tide replaced the "fish book," and that the book on animals was never produced.

While Kitagawa Utamaro is well known as one of the greatest masters of the woodblock print, the importance of his early work as a book illustrator has only recently been acknowledge. Gifts from the Ebb Tide joins a burgeoning group of books by the artist at Marquand that we hope will continue to be a great resource to scholars now and in the future.

(1) Roger S. Keyes, Ehon: The Artist and the Book in Japan. New York, Seattle and London: New York Public Library, in association with the University of Washington Press, 2006, p. 112 and J.J.O Sexton, "Illustrated Books of Japan. IV: Utamaro's Book of Shells," Burlington Magazine, March 1919, p. 99.
(2) Translation by John T. Carpenter for the Fitzwilliam Museum's (Cambridge) website, which features a digitized, interactive version of their copy of Gifts from the Ebb Tide.
(3) Akera Kankō, a low-ranking samurai, was known to use his wealth to fund publications, so there may have been some collaboration here, but Jūzaburō was known for his innovative book concepts.
(4) Ibid (reference and translation).
(5) The original "Thirty-Six Immortal Poets," were the most exceptional poets from the 7th- through 11th-centuries as selected by the nobleman and poet, Fujiwara no Kintō (996-1075).
(6) The goal of the game was to match shell halves with either the verses written or the paintings painted on the interior of each shell.