According to the pioneer Library of Congress map librarian Walter Ristow, wall maps1 were the most common county map format in the decade before the Civil War: some 350 were published with great detail, including the names of property owners and their locations. But their large size was self-defeating, leading to wear, deterioration, and attrition. Hence, the tremendous popularity of county atlases, which blossomed in the 1860s, 1870s, and 1880s, as cartographers followed the expansion of the country westward.

Despite their limitations and inaccuracies, nineteenth-century county atlases nonetheless preserve a detailed cartographical, biographical, and pictorial record of a large segment of rural America in the Victorian age.2

The county atlas was a unique American cartographic format, usually subsidized through local subscription. The payoff would be an engraving of the subscriber's farm or business establishment as pictorial enhancement of the town maps: it was a clever arrangement that provided ready-made publicity and customers. All of this was a logical expansion of the business model already developed for earlier wall maps.

Harrington Bates's How 'Tis Done (1879) is a blistering exposé of the map publishers' business strategy in the making of these nineteenth-century county maps and atlases. "In nearly every portion of the Eastern, Middle and Western States the people have been made to pay a mighty tribute to the map, atlas, and county history schemes" [Bates, p. 11]. Though the wall map and county atlas businesses began in the East, Bates draws heavily on midwestern examples, particularly maps and atlases of Illinois and Iowa. He groups map canvassers with snake oil peddlers. The scheme they used was as predictable, he says, as it was profitable. Enlist official endorsements. Get the local Board of Supervisors to buy a copy of the map/atlas for each county and township officer. Secure newspaper advertising that promoted the public benefit of the project. Convince prominent citizens of the usefulness of the map/atlas in promoting the beauty and business opportunities of their localities. Use their testimonials in print advertising and in word-of-mouth publicity. Send out well-dressed, smooth-talking canvassers to solicit the farmers and merchants who, by then, had already heard positive news of the project. Obtain subscriptions by flattering them about their farm/business and by showing them how their neighbors will be envious of the detailed, idealized engravings they order. Make price an afterthought. 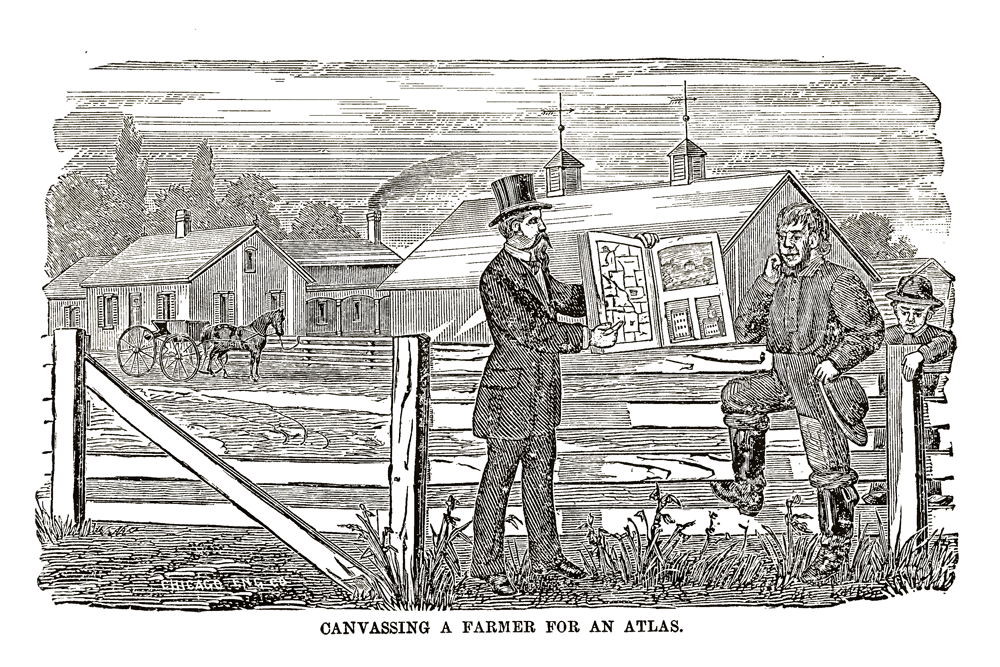 Illustration of canvasser selling a county atlas to a farmer [Bates, p. 65].

The profits to the publisher could be substantial. Bates gives examples of both a county wall map's production expenses and subscription revenues and a county atlas's balance sheet:

Map of Hunterdon County, N.J., from Original Survey Throughout the Whole County.—The subscribers are preparing to publish, by subscription, a new and complete Map of Hunterdon County. —The survey will be made by Samuel C. Cornell, one of the Publishers. All the public roads, and the locations of the Mills, Taverns, Churches, Post Offices, School Houses, Country Stores, Smith Shops, Wheelwrights, &c., are to be marked. The Names of Property Holders are also to be inserted upon their places, in the style of the Map of Mercer co., about to be published. To be illustrated with vignettes of views in Hunterdon county. A Map of Flemington, on a large scale, will be inserted in the margin.

The plan will be plotted to a scale of 1 1-4 inches to the miles, which will make a large and ornamental Map, to be engraved and delivered to subscribers, handsomely colored, mounted and varnished, at $4.50 per copy.

This Map will be about the size of Gordon's State Map, and will differ from it by containing the names of the property owners, and much minute local information that could not be noticed in a State Map.

We have received from the publisher, a copy of a Map of Hunterdon County, entirely from original surveys, and after a careful examination, we feel no hesitation in saying it is an invaluable acquisition to our County, and cannot fail to commend itself to our citizens. In every particular it is a correct representation, embracing all the roads, mountains and streams, with the names of landowners, laid down in their proper places. It also gives on the margin a plan of Flemington and Lambertville, and an engraving of the County buildings, beside the State Capital at Trenton. We trust that since this Map will be of important value to every citizen of our County, it will meet with a ready sale at the price demanded, that being only $4.

Unscrupulous men and methods? To the modern consumer, they seem contemporary, for today's "peddlers"—car salesmen, insurance agents, pharmaceutical companies—continue to borrow from these time-tested techniques. From the perspective of history, however, the verdict is clear, as Ristow acknowledged: the surviving county maps and county atlases are of inestimable value as visual records of the past

1 Large-scale maps—usually three feet by four feet or larger—meant to be displayed on a wall, not bound into an atlas. 2 Walter W. Ristow, American Maps and Mapmakers (1985), p. 424. By his account, over seven hundred county atlases were published between 1862 and 1886. During the peak year, 1875, almost one hundred of these atlases appeared.
Back to Top