First wall map of what became Union County in 1857 from part of Essex County—essentially the two bottom sections of the map, stretching from Elizabeth Township in the east across to Springfield Township in the west. In 1668, Philip Carteret, New Jersey's first colonial governor, made Elizabethtown (today's Elizabeth) the capital of the territory. During the American Revolution the area's proximity to New York City and Staten Island, British strongholds, led to constant attacks by their troops.

"Connecticut Farms," shown west of Elizabethtown, was the site of one such skirmish, the Battle of Connecticut Farms. Hoping to overwhelm General Washington's major force at Morristown, Hessian General Wilhelm von Knyphausen led a force of six thousand British and Hessian troops across from Staten Island. But heading west, his forces met resistance from American militia along the road and were delayed long enough at Connecticut Farms on June 7, 1780, that they retreated the next day. Often overlooked, this battle late in the war helped deter further British activity in the north.

On the map, Elizabethtown is clearly the transportation hub of the area, where two of the state's important railroads, the Central Railroad and New Jersey Railroad, cross. The first section of what became the Central Railroad was built in 1831, linking Elizabethport on Newark Bay to Elizabethtown. The Morris Essex Turnpike, shown running horizontally west to east, joining Morristown (off the map) to Elizabethtown, was built in 1806, with a spur from Springfield to Newark.

Feltville, visible just west of the "W" in Westfield, was founded in 1845 as a New England–type mill village by David Felt, who ran a New York City stationery business. By damming Blue Brook, he created the nearby lake (today's Lake Surprise) for his paper mill. In an era of exploitative labor practices, Felt provided homes for his mill workers, a post office, and a school for their children. But "King David," as he became known, also demanded that his workers attend his church and obey his rules and regulations. Felt sold the operation in 1860; successive businesses failed. In the late 1800s, another businessman transformed the area into Glenside Park, a summer resort for wealthy New Yorkers. That closed in 1916, and, ultimately, the place became a deserted village. Today, the county maintains the site as a historic district in its Watchung Reservation.

First wall map of Union County, the most decorative of all nineteenth-century wall maps of New Jersey counties. The county map identifies eight townships, bordered and tinted in blue, pink, yellow, or orange: Elizabeth, Plainfield, Linden, New Providence, Rahway, Springfield, Westfield, and Union. At the time of the map, Linden Township had just been created (March 4, 1861) from portions of Elizabeth, Rahway, and Union Townships. Hence, it is absent in the tables of township statistics (bottom center), which were compiled earlier. (It would incorporate as a city in 1925.) A note below the tables gives the area of the new township and the portions taken from each of its three "parents," and states that the old boundaries between Elizabeth, Rahway, and Union are represented by dotted, but uncolored, lines on the map.

The tabular statistics comprise the most complete Civil War–era view of a New Jersey county shown on a map. Four categories of data are represented for each township: 1) area and population, 2) religion and education, 3) agriculture, and 4) manufactures. One learns, for example, the number of dwellings and families, the proportion of white and "colored" residents, how many people hail from foreign countries (Germany is the source of the largest number of immigrants), the collective value of property, and the number of paupers. A census of nine different religious faiths is given (Presbyterian is the most common): the number of churches and the size of their congregations. Approximately one-third of the schools in the county are private. Nine hundred and twenty-eight farms produce commodities worth more than five-hundred dollars annually. Corn, oats, and potatoes are the most common crops, and butter production tops more than 230,000 pounds. The county primarily manufactures and/or produces carriages, clothing, oil cloth, rope and cord, flour and feed, hardware and tools, and timber and lumber. In 1861, the value of the products of its 181 factories, employing 2,630 males and 1,293 females, totaled $2,921,739.

2013: Liberty Hall. The original fourteen-room Georgian-style home has grown into a fifty-room Victorian mansion. Seven generations of Livingston and Kean family descendants owned the house continuously until it became a public museum in 1974. It is located on the Liberty Hall Campus of Kean University. The horse chestnut tree in the front was planted by Susan Livingston in 1770. It is the oldest known in New Jersey.

Surrounding the county map are thirty-four scenes of private residences, churches, public buildings, business establishments, Elizabeth street scenes, and two seminaries—reminiscent of seventeenth-century Dutch cartes à figures, maps with figured borders. One of the top-right vignettes features "Ursino, Residence of John Kean, near Elizabeth." This is Liberty Hall, the former residence of William Livingston (1723–1790), the first elected governor of New Jersey and a signer of the Constitution. John Kean (1756-1795) was a delegate to the Constitutional Congress from South Carolina and first husband of Livingston's daughter Susan. She renamed the estate "Ursino" for her second husband's Polish estate.

The original fourteen-room Georgian-style home has grown into a fifty-room Victorian mansion. Seven generations of Livingston and Kean family descendants owned the house continuously until it became a public museum in 1974. It is located on the Liberty Hall Campus of Kean University. The horse chestnut tree in the front was planted by Susan Livingston in 1770. It is the oldest known in New Jersey.

Two sweeping views of the countryside anchor the bottom corners: "View of Westfield, from the East" and "View from Prospect Hill (on the estate of O. J. Hayes), Summit." W. T. Crane (1832-1865), the artist responsible for these "views drawn from nature," worked as a special artist for Frank Leslie's Illustrated Newspaper during the Civil War. 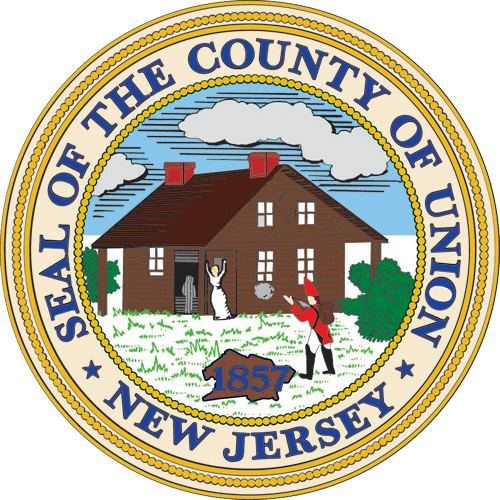 The Union County seal. The seal bears an image of a woman being shot by a British soldier: it represents Hannah Caldwell, wife of Reverend James Caldwell, an active supporter of the American cause. She, indeed, was shot and killed—by whom it is not clear—when the British torched Caldwell's Elizabethtown church buildings as they passed through the town in June 1780 (see the next map). Her martyrdom became a rallying point for the patriots in the county. Unique in the country, Union County's seal has been the subject of much controversy.
1879: Town Wall Map. Ernest L. Meyer. 'Map of Elizabeth Town, N.J. at the Time of the Revolutionary War, 1775–1783: Showing That Part of the Free Borough and Town of Elizabeth, Which Is Now the Site of the City of Elizabeth' (N[ew] Y[ork]: J. Schedler, 1879) [Historic Maps Collection]. Wall map, with ornamental border and added color, 81 × 67 cm, on sheet 100 × 73 cm. Scale: 600 feet to 1 inch. One of nine known institutional copies.

An extraordinarily detailed historical map of the town and surrounding area: the first of its kind for any New Jersey community. Of central interest are military operations by British and Hessian regiments from June 8 to June 23, 1780; their movements are keyed by letters to descriptions given at the bottom right under the heading "The Fortifications and Positions of the British Forces." A timeline of Elizabeth-related "Incidents of the Revolution" follows underneath. Several notable people and structures, clustered around the stone bridge at the center of town, are mentioned in the adjacent text. Of particular interest is Reverend James Caldwell, the minister of the First Presbyterian Church during this period, who was known as the "soldier parson"; he was murdered in 1781 by a sentry.

Meyer's map also identifies the locations of woods, orchards, cultivated land, pastures, and salt meadows throughout the area. The size of farms, when known, is indicated in acres. The panel of text at the bottom contains a key to the "Names of Owners Referred to by Numbers."

First wall map of Summit Township, which was created from parts of New Providence and Springfield Townships in 1869. (It incorporated as a city in 1899.) Six concentric circles, at one-quarter-mile intervals, emanate out from the town center, the Summit station of the Morris and Essex Railroad. Extremely detailed, the map provides the names and locations of landowners, businesses, and public facilities. The size, in acreage, of many of the properties accompanies the landowner's name.

First atlas of Union County. The large format volume (roughly 50 × 40 cm) consists of nineteen maps, many of them covering several pages. There are outline maps of the county and the city of Elizabeth (incorporated 1855); multipage maps of the cities of Elizabeth, Plainfield (1869), and Rahway (1858); maps of the villages of Cranford, Linden, Roselle, Summit, and Westfield; and township maps of Clark, Cranford, Fanwood, Linden, New Providence, Springfield, Summit, Union, and Westfield. The Elizabeth maps—at a large scale of 200 feet to 1 inch—bear symbols for fire hydrants, stables/sheds, horse car tracks, and steam railroads; different colors distinguish brick/stone buildings from those made of wood.

The names, numbers, and boundaries of the school districts are shown in red.

The township is divided in two by Robinson's Branch, a tributary of the Rahway River. Dams have created two reservoirs in that area: Clark Reservoir and Middlesex Reservoir. The Robinson Plantation House, shown on the map as the home of the contemporary owner Lewis Smith (right center, with dotted lines leading to the house), is one of the few remaining examples of seventeenth-century architecture in the state. It was built around 1690 on the seven hundred–acre farm of Dr. William Robinson, one of the first physicians in the area, who had emigrated with his family from Scotland.

Only five families have occupied the house since 1690. The township acquired the property in 1973; the Clark Historical Society restored it. It opened as an educational facility in 1978 and is registered on both state and federal historic site lists.

The map is bisected horizontally by the Pennsylvania Railroad tracks and vertically by West Brook (Morse's Creek today). Edgar "Shunpike," aptly named at the time because farmers were adverse to paying the toll, is now Route 1. St. Georges Avenue is part of the Lincoln Highway, the first transcontinental highway for automobiles. Dedicated on October 31, 1913, the route stretches from Times Square in New York City to Lincoln Park in San Francisco.