One senses that the numerous proposed (dotted lines) and unnamed roads laid out in the empty areas of the townships anticipate rapid development. There are two main railroad lines: the Camden & Atlantic Railroad bisects the county diagonally (northeast/southwest); the Vineland Railroad enters and exits at top left. The spur shown joining May's Landing with Egg Harbor City was completed in 1871 by the Egg Harbor & May's Landing Railroad. What is absent from the map is also intriguing: Absecon and Brigantine beaches are inaccessible, hence completely undeveloped.

2013: Old Atlantic County courthouse buildings. Notice that they are now joined. They provide office space for the county clerk and the county surrogate.
1872: "May's Landing." Lithograph map (inset taken from the county map), with added color. Scale: 30 rods to 1 inch.

The green square on Main Street near the river shows the brick edifices of the surrogate's office, the courthouse, and the clerk's office. Built in 1838, they were renovated in 1978.

1834: Mays Landing, p-t of Hamilton t-ship, Gloucester co., upon the Great Egg Harbour river, at the head of sloop navigation, 16 miles from the sea, 35 miles S.E. from Woodbury, 73 from Trenton, and 181 N.E. from W.C.; built on both sides of the river, including the village of Hamilton, and contains 3 taverns, 4 stores, a Methodist church, and 25 or 30 dwellings; a considerable trade in cord-wood, lumber, and ship building, is carried on at this place [Gordon, p. 175]. 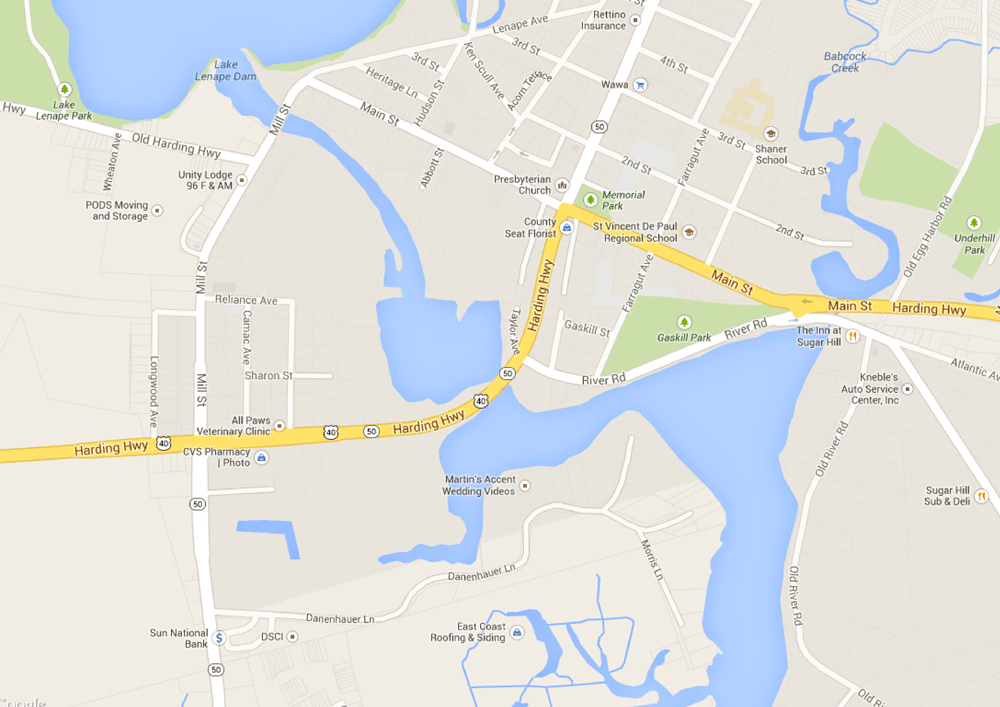 "Mays Landing." [Map data: Google Maps, 2013]. Visible in light green, Gaskill Park resides on a swampy section of the Great Egg Harbor River that was filled in in 1928. Route 40 crosses over the river on a newer bridge.

Located on Absecon Island in Atlantic County, Atlantic City has been a major American summer playground since it formally opened in 1880. It was the inspiration behind the popular board game Monopoly. Since gambling casinos were introduced in the late 1970s, the city has become a popular year-round resort.

Founded in 1867 by the young surveyor D. A. Sanborn, the Sanborn Map Company became synonymous with large-scale fire insurance maps of commercial, industrial, and residential areas of American towns and cities. Its virtual dominance of the market ended soon after World War II, as the insurance industry's needs changed. Princeton University Library's Historic Maps Collection has digitized its holdings of more than sixteen thousand historic Sanborn maps of New Jersey communities, ranging in date from 1884 to 1950. Access to the high-resolution images is free.1 Color-coded to show building material (such as frame, brick, stone, or iron)—and providing the size and footprint of each structure at its signature scale of 50 feet to 1 inch—the maps are frequently used today in historical preservation, restoration, and development projects.

Under the title of this Atlantic City page, several key factors relevant to fire insurance assessment are briefly noted: population (30,000 residents), water facilities and system capacity, and fire department (280 members) and equipment. (The dozens of hotels named here, visited by hundreds of thousands of visitors annually, were constant fire hazards, and a number of disastrous fires ravaged the city through the middle of the twentieth century.) The index at the top identifies the map sheet (numbered 2–38) associated with a street address (under "Streets') or a business (under "Specials"). The index map at the bottom provides an overview of the layout and scope of the individual map sheets: an alternative way for one to find the specific map sheet that covers a geographical area of interest.

The adjacent map is sheet 28 of this 1886 Atlantic City series, showing the area bordered by the Atlantic Ocean and Pacific, South Missouri, and South Michigan Avenues, as well as the extent of the Iron Pier that juts into the ocean from the bottom of South Massachusetts Avenue. Erected on iron pilings, this pier had just opened in the spring and featured rides and exhibits along its length, with a large theater on the ocean end. (It was the city's first ocean pier, and was razed in 1945.) Landmark hotels in this part of the city included the Shelburne and the Fortescue, both of which had long lives as luxurious destinations for tourists. (The Shelburne site is now occupied by Bally's Wild Wild West Casino.) Nearby, in a building over the water, was the "Punch & Judy Show": an ever-evolving puppet show, primarily for children, that had its origins in seventeenth-century England; local versions were often found at many seaside, carnival, and festival venues. Note that all of the structures are colored yellow, indicating that they were constructed of wood.